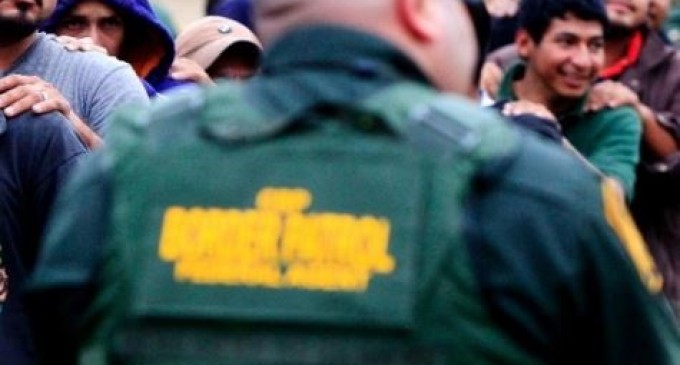 Earlier this week, DHS Secretary Jeh Johnson declared a “level-four condition of readiness” along the Rio-Grande Valley area of southern Texas. They state that unaccompanied minors crossing over have outnumbered the resources of federal agencies have for managing border security.

But with 36,000 known criminal illegals being released onto streets in 2013, Rahm Emanuel announcing 23,000 Chicago jobs will being given to illegals, DHS border patrol being given pellet guns and tasers to defend our borders, Biden stating they are going to stop deportations, and even a Texas judge stating last year that DHS helps smuggle illegals into the US…well..

Perhaps interpreting their announcement “Level 4 alert, there are too many illegals coming into Texas for us to handle”, should be interpreted as:

“We plan on bringing in lots of Democratic voters and future soldiers for Obama personal armies into the country right now across the Texas border, please make sure we are prepared to receive them.”

The Texas-Mexico border is being overrun by a surge of young illegal immigrants who are traveling alone.  So much so, that Homeland Security Secretary Jeh Johnson, earlier this week, declared a “level-four condition of readiness” along the Rio-Grande Valley area of South Texas. Unaccompanied minors have outstripped the resources of federal agencies responsible for managing border security and immigration.
Last weekend, according to a New York Times article by Julia Preston, the Department of Health and Human Services opened a new shelter at Lackland Air Force Base in San Antonio, Texas.  The facility will house up to 1.000 minors. Transfers of minors to the facility will be handled by both land and air.

The Level-four condition declared by Secretary Johnson is the highest condition level for the agencies involved in taking care of young unaccompanied minors and allows for the Department of Homeland Security (DHS) to call upon other agencies, like the Department of Defense, for resources that might not otherwise be available.

Johnson told the New York Times on Friday, the influx of young immigrants has “zoomed to the top of my agenda” after he visited the McAllen, TX, Border Patrol station where he found many young children, one of whom was three-years-old.  Johnson spent Mother’s Day at the McAllen Border Patrol station at the request of his wife. During the visit, they asked a twelve-year-old girl where her mother was.  The girl replied she did not have a mother, but her father was living in the United States.

The Pentagon told Johnson they would make the 1,000 bed facility at Lackland AFB available for four months while the children are being processed.  Unaccompanied minors, according to the Times article, are handled differently than adult immigrants.  By law, they must be turned over to a Health Department office within 72 hours of their apprehension. The Health Department must begin the search for relatives living in America who can take care of them until their cases are processed through the courts.  This search for these relatives can take weeks or months to carry out.

The large influxes of unaccompanied minor children are coming primarily from Honduras, Guatemala and El Salvador. From these countries, the children begin a very long and dangerous trip across Mexico and into Texas without the assistance of parents or other close adult relatives. Johnson spoke with the ambassadors from these three countries who agreed to begin a publicity campaign to attempt to dissuade children from heading to the United States.

While many make the trip to find parents or other relatives living in the United States, others are fleeing from gang or cartel related violence in their towns and villages. Most of these children will not be found to be eligible for legal residence in the United States and will be returned to their home country where they face an uncertain future.

“We have to discourage parents from sending or sending for their children to cross the Southwest border because of the risks involved,” Mr. Johnson said. “A South Texas processing center is no place for a child.”