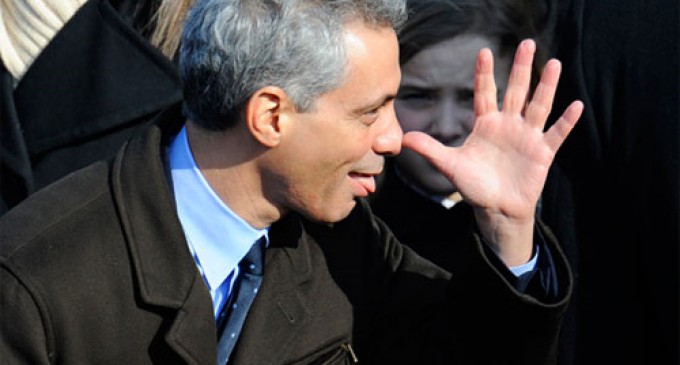 Chicago mayor Rahm Emanuel announced on their cities' website that 23,000 city jobs, volunteer positions and internships were now open to the DREAMers, the children of immigrants illegally here in the US.

DREAMers is an acronym for the Development, Relief and Education for Alien Minors Act.

Law? What law? The Democrats need voters and people who will join Obama's civilian military.

Chicago’s mayor wants his city to become the epicenter for talented but illegal immigrants in the United States.

In a posting on the city’s website, Mayor Rahm Emanuel announced that the Windy City’s 23,000 jobs, volunteer positions and internships were now open to the DREAMers, the children of immigrants illegally in the country, Breitbart reported. DREAMers refers to the Development, Relief and Education for Alien Minors Act, which currently is in limbo in Washington.

Pro-amnesty Congressman Luis Gutierrez, D-Ill., no stranger to controversy, said in the announcement that these students “are an integral part of Chicago’s workforce of tomorrow. Once again, the City of Chicago and Mayor Rahm Emanuel are leading the way on the inclusion of our immigrant communities.”

In “justifying’ his preference for young people here illegally over citizen-students who would vie for the opportunities, Emanuel wrote, “Chicago is a city that was built by immigrants and I am committed to ensuring that DREAMers have the same opportunities offered by the City to all of Chicago’s youth.” His posting laments the barriers that young people here illegally face in landing jobs.

To alleviate these obstacles, the former Obama chief-of-staff allotted extra funds and harnessed the city’s considerable resources – the Office of New Americans, the Department of Family and Support Services, and the Department of Human Resources – to coordinate outreach activities and information campaigns, Breitbart reported.

Of course, the fact that these youngsters are not citizens and not legally eligible for these fellowships, internships, volunteer positions and jobs counts for naught, when circumventing the law has been made kosher by the President of the United States himself.

Emanuel’s pandering to illegals confirms the long-range Democratic plan, to ingrain a widespread general amnesty into the land, and insure an ever-growing Democratic voting base for the future.