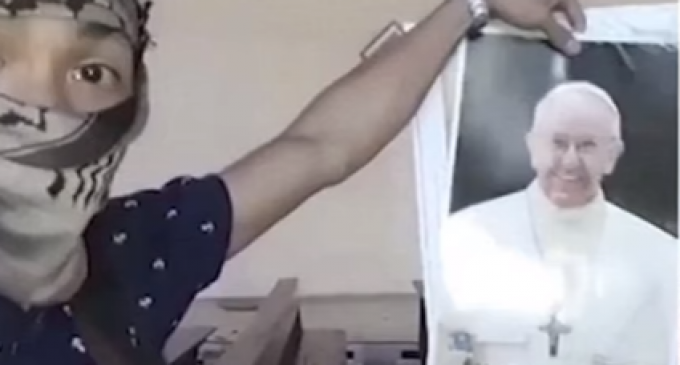 Pope Francis would be well served by reading the children’s book “If You Give A Mouse A Cookie” before puckering up to kiss the buttocks of Lucifer.

He is currently writing the unofficial book “If You Give A Jihadist Validation”, with his outlandishly liberal attempts to appease the terror that is radical Islam.

“Islam is a religion of peace, one which is compatible with respect for human rights and peaceful coexistence,”

First, the Commie Venezuelan Jesuit imposter, Jorge Bergoglio, (known to the innocent as Pope Francis) said that “all religions worship the same God”, then he said “Jesus failed on the cross”, then he started praying towards Mecca. And still, the terror attacks kept happening. They needed more moronic Western authority figures to publicly jerk around. Or as Hillary Clinton and Madonna once put it “they just need more hugs and love”. That is when Jorge Bergoglio decided to pucker up all the way and get down on his knees to kiss the cesspool that is the infamous unnamable religion founded by a child diddling “prophet” roughly around 610 A.D.

ISIS decided to thank (mock) Jorge Bergoglio by threating to do some pretty ghastly things to his body, and every Christian in his flock for that matter, in their latest propaganda terror video. Head on over to the next page to view this video for yourself and learn more about how Jorge Bergoglio has been feeding the enemy (ISIS) while refusing to stand-up for the church.