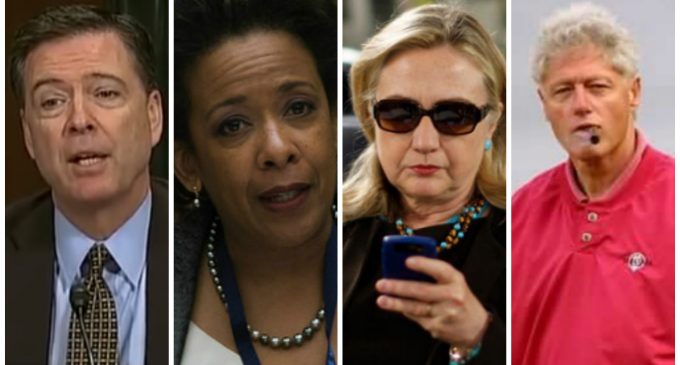 On a level not seen since the 1970s and honestly just as corrupt as to have forced a president from the Oval Office, the Loretta Lynch-James Comey story is a blockbuster.

As the Congressional hearings continue day after day, with Republicans and Democrats jockeying for the lead, Senator Charles Grassley (R-IA), Chairman of the Senate Judiciary Committee, has been in the process of attempting to wade through all the lies, misdirections, diversions, subterfuges, and obfuscations of the DOJ-FBI investigation of Hillary Clinton's illegal email server issue.

The incestuous relationship of the two departments has brought into question the series of events that took place, beginning with the infamous “tarmac-meeting” of former president Bill Clinton and then Attorney General Loretta Lynch.

The set-up to this series of events actually begins with former president Obama and his devious plan to federalize all police departments in the nation under one government head.  Oddly, in retrospect, it appears that the divisiveness engaged in by Obama between Blacks and Whites in this country led directly (and perhaps purposefully) to a rise in hyper-vigilance on the part of police officers who seemed embattled by the African-American neighborhoods.  This combat-mentality between Blacks and police officers seems as though it was pushed on a nightly basis by both Leftist Democrats and its willing accomplices in the media.

The resulting outcry in black communities for justice led to the formation of Black Lives Matter and its satellite groups who prided themselves on in-your-face confrontation.  The narrative continued on through  most of Obama's presidency, culminating in an extra-Constitutional attempt to take over police departments throughout the nation.

AG Lynch was deeply involved in all this activity during the waning days of the campaign between Clinton and Trump.  As she was flying all over the nation, visiting police departments to push this new intended takeover of law enforcement nationwide, she was awaiting another take-off on the tarmac of an airport in Phoenix.  According to reports by the mainstream media which did its damnedest to begin spin in a positive innocent light, announced that as former president Bill Clinton arrived at the same airport at the same moment after playing a round of golf in 100+ degree heat under an Arizona sun, miraculously spotted the attorney general's plane on the runway and sent his aide scurrying down to request a quick, impromptu meeting to say “hello.”

Again, according to the reports, the meeting was completely aboveboard and merely reflected an unspoken protocol between high-ranking political officials that commands this type of friendly banter when one official coincidentally meets another official in an unplanned fashion.

That meeting led directly to the series of events that now have Director Comey squirming in his seat at the Congressional hearings.