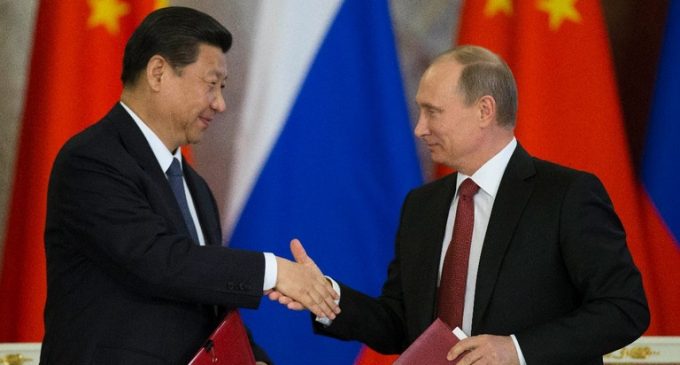 How many of you remember the former MSNBC host, Keith Olbermann, on the lunatic fringe quite a few months ago imploring other world powers and Deep State intel shadow weasels to conduct a military-style coup and remove Trump from the presidency?  It was memorable for a couple of reasons:  One was that it was filmed in Olbermann's mother's basement (where he is currently residing) and two, it sounded alarmingly close to the entire Leftist movement of Obama's Jackass Brigade shortly after he left office and purchased the $5.3M mansion down the street from the White House and which acts as a makeshift Department of Shadowy Endeavors (DSE) office, run by Obama and his Communist cousin, Valerie Jarrett.

Well, it appears that Keith Olbermann may have gotten his wish.  Not so much in the sense that Trump would be taken out of action.  But more in the way that a foreign power (or more accurately, TWO foreign powers) has managed to plan a way to designate the United States as a rather innocuous world power, at least as far as their monetary prowess.

Many people wondered why it was that the Trump administration had worked so hard to secure the US-Saudi military and trade deal a few months ago.  The one that had Senator Rand Paul's panties all up in a wad because he feared that this was a betrayal of our trust to a country that had been responsible in part for 9/11.  With the most recent news, however, that both China and Russia are working on a deal that would bring the United States to its knees economically, the move to curry favor with the Saudis may have been a preemptive strike on the part of the Trump administration to halt that nation from joining China and Russia!

What is this plan and how could it possibly damage the United States so irreparably as to sink the American empire?  Turn to the next page to find out!