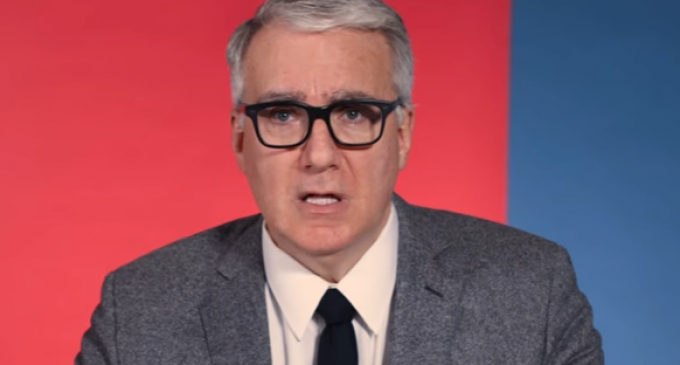 It's so uplifting to have found that Keith Olbermann's still working.  I can see that he's dressed his mother's basement up a bit, having staple-gunned both the Russian red and Democrat blue curtains to the wall behind him.  It's also nice to hear that his sound system has been slightly upgraded from the TRS-80-run microphone that he had 72 videos ago.  And hiring his mom to do his hair and make-up was a brilliant move.  Whatever GQ Magazine is paying him, they need to bump that up by at least another buck-three-eighty.

So, onto to Vid #74 of The Resistance, which we will title “the Trump Junta” or “How a Man Without a Political Clue Was Able to B*tch Slap the Leftists.”

Keith Olbermann is, without a doubt, one of the keynote speakers for the Democrat wackos, as he produces these strangely underfunded videos for a Metrosexual magazine devoted to guy-liner and manscara.  Is it possible that George Soros strips down to his bedclothes and watches these videos, ready with his hand on the phone to funnel money to Olbermann, like an old lady at a retirement home watching the Home Shopping Network?

Olbermann most likely devotes most of his evening chanting to the Hillary idol he has on a small altar in his closet, lined loving with all his grey suits, and then jumps into the resistance speech of the day.  “The Trump Junta” dives right into the subject matter within seconds in calling all nefarious and underhanded shadow government type entities, including all the sinister intelligence agencies of the world, spy networks, and cabals, camarillas, and dictatorships to invade the United States and bring down the Trump presidency.

As if that wasn't bad enough, he also acts as James Comey's attorney as he blasts the Trump administration for being mean to the former FBI Director.  I'm pretty sure that this is the same guy who was calling for the Director to be fired a few short months ago.

Regardless, the Resistance is on the march and receives anywhere between 200-300K views per video.  Not a bad haul, but when one considers that half of that number are most likely Right wingers looking for a good laugh at the expense of Basement Boy and his lunacy, it's not quite as impressive.

However, the magic of Olbermann lies in the apparent seriousness of his words.  Not just the fact that he is calling for situations that would be (in any other era of the history of this country) treasonous, but the fact that his mindless zombies who have been vaccinated against common sense and intellectual engagement (i.e., college students, D.C. Establishmentariat, ACORN-style organizations, and community organizers) is what is so dangerous about this guy's words.