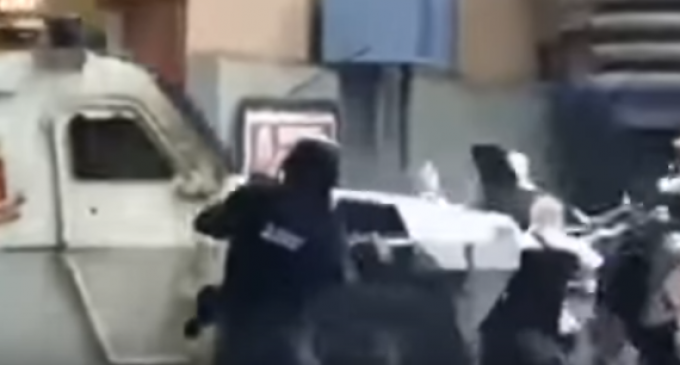 In the latest of clashes between heavily armed Venezuelan government militia and unarmed civilian protestors, an armored military SUV purposefully drives into a crowd of civilians and runs over several of them.  This is really a move in the direction of a tragic Shakespeare play where the final death throes of one of the main players is unfolding before our eyes.  And the main player in this tragedy is Nicolas Maduro and his austere Socialist regime that has been pressing its iron boot down upon the throats of a broken people.

The Venezuelan government has been steadily deteriorating for the past five years and the effects have been a terrible shortage of basic supplies, food, fuel and medicine which has spurred on this situation of near civil war.  Five years ago, President Maduro made the first move in a series of moves that allowed him to consolidate power in the Socialist-run nation and that was to completely outlaw the sale of any weapons to private citizens.  Once that was achieved, he authorized a series of buy-back programs that were designed to rid the streets of any chance of future resistance.

Three years ago, unemployment, inflation and the shortages of food and basic supplies reached an all-time high and people began serious protesting.  Over and over, the protests appeared and then evaporated as the United Nations declined to act in any capacity to assist the flailing nation.  Maduro himself made it nearly impossible for help to arrive as it was because of his stringent edicts that restricted trade and diplomacy with neighboring countries.

Maduro is also a compulsive liar, as well as a compellingly paranoid leader and these behaviors have driven his personal grievances against his own dissatisfied citizenry.

The most recent protest is the most enormous and forceful of all and was initiated in large part due to the Supreme Court being directed by Maduro to strip the Parliament of its powers to enforce law.  The Supreme Court, seen as a loyalist Maduro body, stepped into the role of lawmaking and this was seen as a coup-de-tat by the people.  They picked up their signs and their children and hit the streets.  It is now week three of these protests and unrest and Maduro has now become unhinged in his rulings.

In an act of desperation, he has called for every one of his 400K militiamen to be armed in order to confront the citizenry.