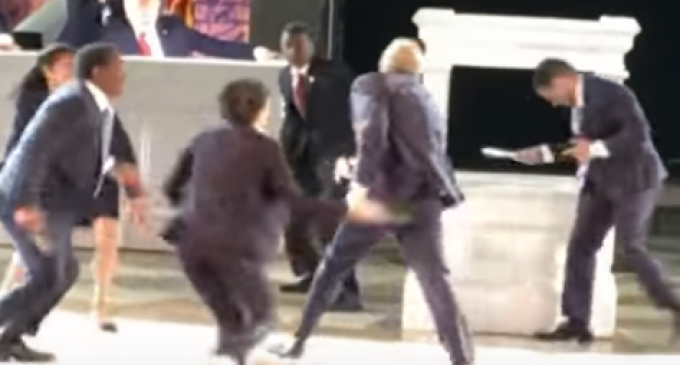 Liberal performers can’t stop themselves from depicting Trump’s murder in the name of “art.”

The most obvious example of this is, of course, Kathy Griffin. The comedienne recently posed for a disturbing photo with a severed Trump head covered in blood. The condemnation was swift. She lost all her shows, her contract with CNN, and her Squatty Potty endorsement deal.

Now, the Public Theater in New York is repeating Griffin’s mistakes. In a recent production of Julius Cesar, they assassinated a thinly-veiled Trump-like character on-stage.

It’s easy to see why so many people are falling into this trap. Art is difficult, but pandering to an audience is easy. These performers know they have a liberal audience, so condemning Trump — or in this case, assassinating him — is an easy way to win them over. It’s certainly easier than telling a compelling story on its own merit.

But they fail to realize that their “art” will be seen from outside of their own anti-Trump bubble. There are ramifications for this kind of disgusting “performance” — and, like Griffin, The Public Theatre is losing its sponsors.

But not everyone is bolting. The usual suspects are still defending the play.

See which mainstream media outlets think assassinating Trump is justifiable on the next page: