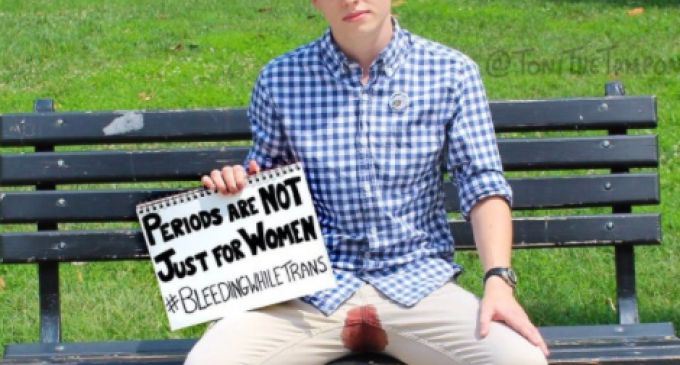 “See my body had betrayed me,” Cass Clemmer laments as she shares blood stained pictures of herself on social media.

Clemmer’s body is doing exactly what it was formed to do. They (it doesn't identify as a boy or girl) was in fact born a girl. Menstruation is a natural biological function of being a woman.

This is confusing. “They” almost seems to signify mental illness and multiple personality disorder. But, transgender rights or problems are a bit too complex to just brush off as mental illness. Plus, you can’t really say that these days without getting reprimanded for hate speech. So, let’s try this a different way. The left is trolling their own followers in the sickest and most disgusting of manners. Some are hilarious like the Vagisil (feminine itch cream) Vagina Challenge where women film themselves screaming out vagina in public settings. Like 21st-century newsboys advertising the availability of their sourdough bread on every street corner.

“Free bleeding” as Clemmer's is doing in this photo to promote “trans periods” was started back in 2014 by a group of kids called 4chan trolling feminists for being stupid. But, the feminist didn't pick up on that and now transgender people like Clemmer are following suit. More on the next page