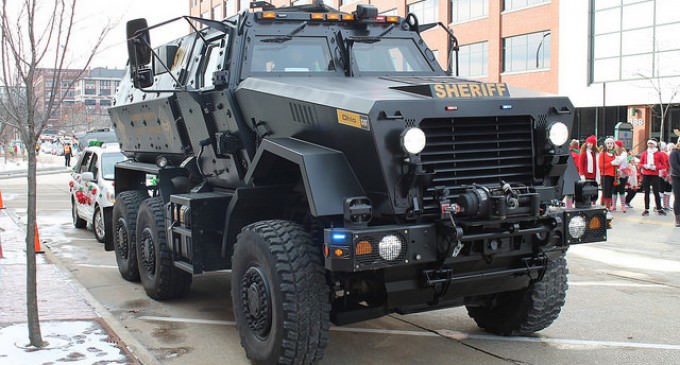 Last Thursday, Sen. Brian Kelsey (R-TN), filed Senate Bill 39, which would prohibit law enforcement agencies from owning or using vehicles or weapons that were once used for military purposes.

“Traditionally, America has had a clear separation between the military and the police to ensure we remain in a free democracy,” Kelsey stated. “I think we can support both our police officers and our citizens by ensuring that our police officers are not viewed as the enemy. This bill is an important step in that direction.”

We all know martial law is coming, and hopefully patriots such as Kelsey will help turn things more to our favor before the communists bring it all down. This is quite optimistic, admittedly, as we see the encroaching despotic federal government and Obama bringing in control measures and martial law preparations faster than the public has a chance to temper their disbelief of what they are seeing.

The bill reads, “No law enforcement agency shall own or use a military vehicle, military aircraft, or military weaponry for any law enforcement purposes.” While it would prohibit law enforcement agencies from owning and using any and all vehicles, aircraft and crew-served weaponry — a weapon that requires more than one person to operate — it would exempt certain weapons — such as “magazine-fed, gas-operated, air-cooled rifles designed for semiautomatic or automatic fire,” which would include M16 and AR-15 rifles — from proscription.

Although Kelsey said he did not speak to law enforcement personnel before introducing the legislation, he added he hoped the bill would be used as a way to begin that conversation.

“I will be speaking with law enforcement agencies throughout Tennessee about this bill,” Kelsey said. “Drafting and filing this bill is the beginning of that conversation. I’m certainly open to any suggestions they have on the issue.”

Local law enforcement officials expressed some misgivings regarding that issue, however. Although he said he hadn’t read the bill, Carter County Sheriff’s Department Chief Deputy James Parrish — whose previous position was as a lieutenant colonel in the Army — said he thought it may have been drafted for political or conversational purposes instead of legislative ones.

“What he’s trying to do is provoke comment,” Parrish said. “I’m sure the gentleman means well. But we would be hesitant to comment on something designed to provoke controversy. If it gains traction, we’ll talk about it at that time.”

Other local law enforcement officials had concerns over the potential loss of equipment that could be wrought from the bill. Johnson City Police Chief Mark Sirois — whose department has participated in a federal program aimed at supplying military equipment to local law enforcement agencies for more than 20 years — said the loss of military vehicles could affect the safety of his officers, and the public, in certain situations.

“Since certain vehicles are prohibited in the proposed bill — vehicles that we feel are of potential value to our community’s safety for defensive purposes in a critical situation — we would be at a disadvantage if we need the vehicles and didn’t have them,” Sirois said, in an email communication.

On April 7, Johnson City police were involved in a 13-hour standoff at 1255 Snowden Terrace. During that standoff, Sirois said, police used armor-plated Hummers — which were supplied by the federal military equipment program — to protect themselves from potential gunfire.

“In a situation like that, the absence of those types of vehicles could be dangerous … for civilians and for the officers,” he said.

While Kelsey’s bill has been introduced in the state Senate, it has yet to acquire a co-sponsor in the state House. Kelsey said he was still working on finding a representative to sponsor the bill.