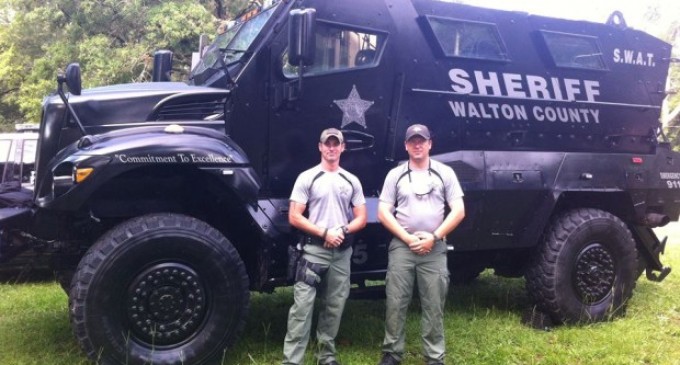 Walton County Sheriff’s Office Mike Adkinson states that their department just got a mine-resistant, ambush-protected vehicle (MRAP) for “an insurance policy,” in order to keep deputies safe in dangerous situations – citing examples past violence in the country.

However one journalist, Justin King, calls out Adkinson's claims of violence as over exaggerated, instead stating that the county is virtually crime free.

Walton County Sheriff’s Officer Mike Adkinson denied that the purchase of the vehicle was an attempt to militarize the police department, adding that he wouldn’t let public opinion get in the way of the “safety” of his colleagues.

“This is not the federal government intruding on your civil liberties,” wrote Adkinson in a Facebook post. “Would you really want them sent into harm’s way without the best protection available, simply because the military originally purchased this vehicle?”

This didn’t stop residents expressing their anger at the decision to buy the vehicle, with one commenting that the purchase represented “an offensive intimidation method used to controll [sic] and strike fear.”

Another respondent agreed, remarking, “This doesn’t make the officers safer. All studies show that the more militarized a department becomes, the more often officers get hurt. This is Walton County, Florida, not Iraq, not Afghanistan.”

As Justin King points out, despite Adkinson’s effort to justify the purchase by pointing to examples where cops have had to deal with suspects barricaded inside their homes, Walton is such a peaceful and virtually crime free neighborhood that it was used to represent an idyllic American town in the 1998 movie The Truman Show.

“Walton County is a part of Florida that is so crime free you can leave your doors unlocked. When Hollywood location scouts were looking for a community so perfect that it appeared to be fake, they came to Walton County. The Truman Show, staring Jim Carey, was filmed on location in a small Walton County community,” writes King, accusing the Sheriff’s department of abandoning common sense by purchasing the vehicle and pointing out that it is only likely to spur additional violence.

“This vehicle is an implement of war. It has no place in this county. The decision to bring this to a small community will only increase violence against citizens by creating a combat mindset in deputies. This violence will be returned, and deputies will face violence on a level not seen before in Walton County,” writes King.