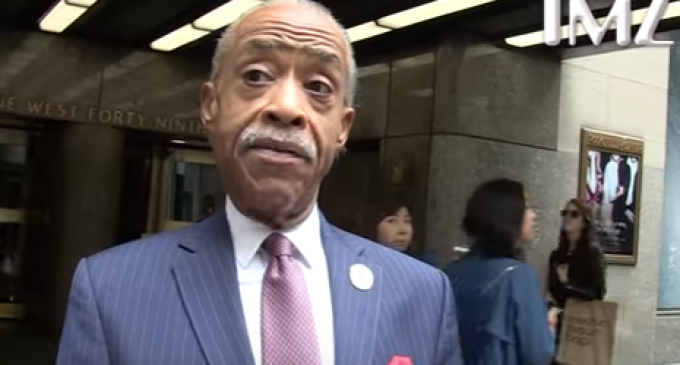 I'd love to say that I feel kind of bad for Bill Maher…not for the way that he's being ganged up on…that I really don't feel sorry about…but for the fact that he just seems to be a very stupid individual.  I mean, you can have a very book-smart man who utters an incorrect term, or maybe misquotes someone, or perhaps even misstates a fact.  But to just be an outright moron?  I guess a Masters Degree in English and History from Cornell University doesn't really keep you from being a total jackass.

TMZ decided that it wanted a more unbiased viewpoint in the whole Bill Maher shameful episode, so they tracked down the “Reverend” Al Sharpton and cornered him on the street (his very large bodyguard a few feet away, hovering like Huell in Saul's office in ‘Breaking Bad').  The very professional question was:  “Gotta ask, man, with the Bill Maher stuff…how do ya feel?”

Yes, that is a legitimate and standard question.  But more than that, it shows that TMZ is trying to be casual, phat, laid-back, hip, bad, nasty, wicked cool and also demonstrates that the interviewer has ‘mad skills'…

Sharpton, as always, treated TMZ as if it was “Meet the Press” and reacted to them in a very serious tone.  Along with the usual words in cases like this of “outrageous” and “held accountable,” he made sure that everyone understood that, despite Bill Maher being a friend, he felt that it was completely inappropriate for a White Liberal to be appropriating the N-word for his own glorification.  There is only person who should be glorifying himself, and that's Al Sharpton.

The interview was quick and Sharpton made sure to throw references into the one-two punch of his two-minute answer that would cause people to go searching on the internet for things like, “Lebron James-house-gate-n-word.”  As for substance, again, it was standard fare for Al Sharpton, who is no stranger to apologizing for really, really dumb statements.

As for the video, it was fun to watch…one time…because it always appears to me that he is so serious about every issue, even when the subject matter is, say, dogs in heat, or tuna fishing off Sheepshead Bay.  The guy has an opinion about absolutely EVERYTHING.  In this case, the Bill Maher question radiates enough energy for one static electricity charge that could (in theory) power a teleprompter for all of three seconds.  To watch the video and a small wrap-up, turn to the next page…