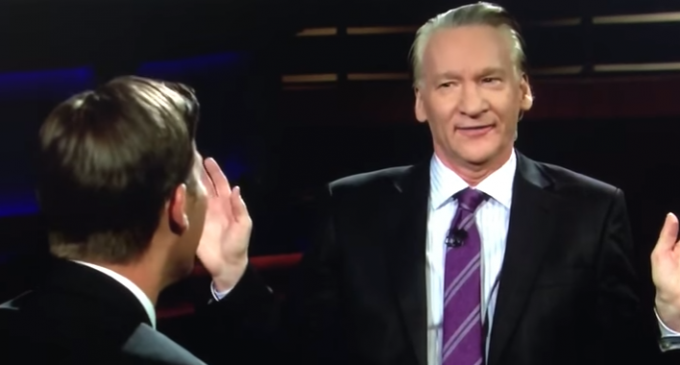 Another day, another Leftist apology.  Gettin’ really old these days.

When there isn’t anything for the Leftists to apologize for, that’ll be a day when Satan purchases a pair of ice skates.  After all the apologizing this week, you’d think that the Libs would now be experts at it.  But as Kathy Griffin proved this week, apologies can be rescinded almost as quickly as they can be issued, with mock sincerity as an aside of course.  Then, as if the faux-tears aren’t enough, we’ll throw down the victim card as well.  And finally, if that’s not enough to get you the sympathies of the masses, time to switch gears to the faux-defiance, “Trump messed with the wrong redhead!”  Even though…and correct me if I’m wrong…the whole “messing” began when the redhead held up a severed and bloody Trump head in a mock Liberal dream that even Jim Carrey could say satisfied him.

And so, we move on the next weak apology where Bill Maher began to feel the heat yesterday after displaying exactly why Liberals should never be live on the air.  No filters, you see.  What I mean by that is that there are no personal filters where they have the little voice in their heads that stops them from issuing a massively ignorant or insensitive remark.  It just jumps out of their mouth.  They can’t help it.  Their rage gets the better of them.  Just think Al Sharpton or Nancy Pelosi.  No filters.

In the case of Maher and his cavalier blurting of the N-word, don’t expect anything to happen beyond a very terse tongue-lashing by the powers-that-be at HBO before happily parading him on stage once again to offend a double helping of Republicans and Trump supporters to make up for his Freudian slip of insulting the Black community.  All of these things SHOULD matter, but to the Leftist world of entertainment, they really don’t.  What matters in any business and, especially in the Progressive world of entertainment, is that advertisers are maintained, controversy is stirred up, and Conservative Christians (or Trump supporters – or both) are insulted.  That’s what really matters.

In this sense, Maher committed a Liberal sin by targeting the wrong audience.  Sort of like when the Lefties lecture us about how utterly clueless African-Americans are with use of the internet or a smartphone and why they just can’t seem to grasp how to find the nearest DMV for either a license or ID.  Yes, they really do.  But, these are not quite insulting enough for the Black community to realize that they are only important to the Democrats precisely for their vote and no other reason.  So, they continue to live under the auspices of caring and tolerance in the crime-ridden, run-down, business-shuttered cities, voting in all those Democrats who (in perpetuity) maintain the status quo.

So how did this apology go over with the Progressives?  Read on to find out…