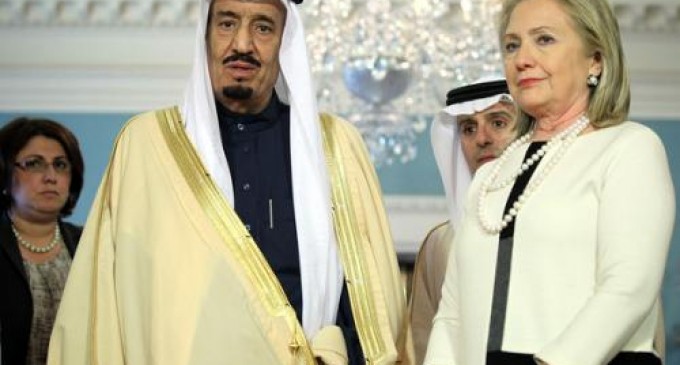 It is illegal for foreign countries to attempt to influence the outcome of elections by funding candidates in the United States, however illegality has never stopped the Clintons from securing power and wealth.

The Saudi Arabia royal family has been a frequent bedfellow of both Bill and Hillary, donating fast sums to the Clinton Foundation, as well as paying the Podesta Group, founded by Hillary's campaign chair John Podesta, a tidy figure of $200,000 to “raise the country’s visibility” in the United States.

The paper-money trail between Hillary and the Saudi Prince is damning and most recently, though now deleted “Petra News Agency published on Sunday, what it described as exclusive comments from Saudi Deputy Crown Prince Mohammed bin Salman which included a claim that Riyadh has provided 20 percent of the total funding to the prospective Democratic candidate's campaign.”

The dirty money exchange has been going on for decades and in a just world should hurt Hillary's bid for election.

Hillary’s close connection with these regimes, which are known for human rights violations, should hurt her Presidential bid, yet her blind and deluded fan-base cannot see through her wrinkled facade.

Read more on, “Prince Mohammed as having said Saudi Arabia had provided with “full enthusiasm” an undisclosed amount of money to Clinton”, on the following page.