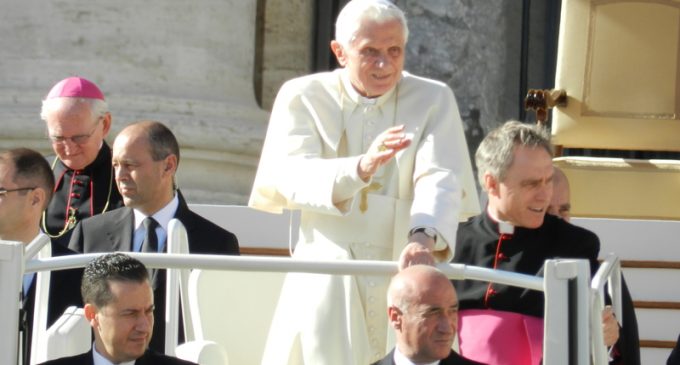 Pope Emeritus Benedict XVI is not afraid of Soros, the socialist global elite, or the powers that be that forced him out of the church.

Many have speculated about the unusual circumstances that led to his stepping down and long awaited his real sentiments regarding the clear corruption in the church at the hands of Pope Francis.

And he has delivered. Hallelujah.

He came out bold and strong about the wolves masquerading as sheep and devouring the Church of God while defaming those who still believe in the authority and power of the one true God. Let us not forget that it was his successor, Pope Francis, who 1st started using his position within the Vatican to preach that unlike what every true believer can see with their own two eyes in the scriptures,“Jesus failed on the cross”, and that “all religions worship the same God”.

Although too ill to attend himself, he wrote a powerful letter that he had delivered in writing and read aloud by his personal secretary, Archbishop Georg Gänswein in the Cologne Cathedral at the funeral Mass of his dear friend, Cardinal Joachim Meisner on Saturday.

Pope Emeritus Benedict XVI perhaps final message to the Church regarding all of these changes and his departure, all on the next page