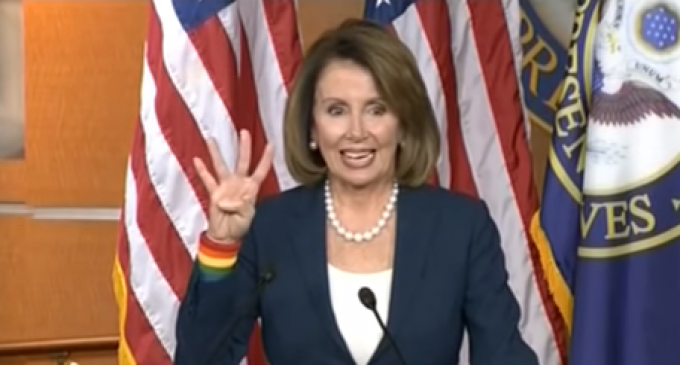 It would seem so.  On three separate occasions, Pelosi has referred to Bush when speaking about President Trump.  There appears to be a specific tunnel vision syndrome under which the House Minority Leader labors.  She is married…happily…I assume.  But there are those moments in a wife's life where she pines for a more romantic man.  A debonair sort of fellow, who will sweep her off her feet and swing her in his arms on a vine to their treehouse in the sky!

I used to wonder a lot about Pelosi during the years of George Bush.  It was often that she spoke longingly of their talks together and, just recently, how she misses him in the White House.  Now, I'm not going to assume I know what's in her mind.  But it does seem suspiciously interesting that she's not saying Obama's name, or Bill Clinton's name, or even George Bush (41)'s name.  She keeps referring to George W.  That, to me, is suspicious.

Now, don't get me wrong.  I'm pretty sure…no, I'm positive, that Laura Bush would wipe the floors with Pelosi.  I mean, c'mon, now…Laura Bush is petite and contrite, but you can just tell she's one of those librarian types who dominates her man.  And if Pelosi even so much as bats a scarily-wide eye at George that the teeth and claws will be coming out to play.

Personally, I don't blame Pelosi for this secret longing for President Bush to be back in office again.  I mean, when you think about it, she and her fellow Democrats at least sat high on the hog while he reigned.  The last eight years have been a living Hell for Pelosi and the Democrats, what with a historic 1,200 seats lost nationally!  Obama was the single most destructive force to devastate the Democrat Party since…well…since never.  He was a humiliation, an embarrassment to the party of tolerance!  So, I get why Pelosi keeps lovingly and fondly caressing the thoughts of Bush in the White House.

Just yesterday, once again, she called President Trump, Bush, and it was caught on video.  To watch the hilarity of the Lucille Pelosi Show, turn the page.