Jade Helm As A Response To Russia Arming Mexico 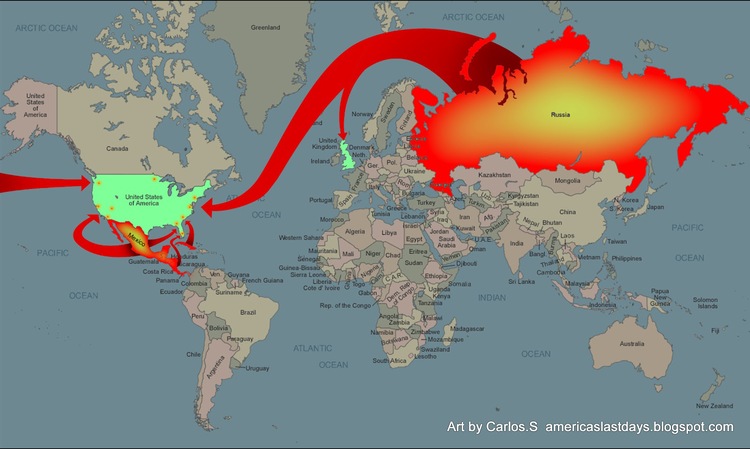 One circulating theory on the nature of Jade Helm states that the exercise is a preparation for Russia's stated threat to ‘arm Mexico' in retaliation for the US arming the Ukraine. This intent would be to open up a dispute of the territory Mexico lost to the U.S. from the Mexican-American war, and an assumed promise to give these lands back to Mexico upon a collapse of the U.S.

The primary basis of this theory is the fact that the states named in the Jade Helm exercise is virtually identical the territory Mexico lost to the U.S.

On Thursday, the speaker of Russian client state Chechnya’s parliament, Dukvakha Abdurakhmanov, threatened to send sophisticated arms to Mexico if the U.S. supplied Ukraine with weapons.

“We will perceive arms shipments to Ukraine as a signal to respond in kind,” he stated on the parliament website.

Abdurakhmanov went on to state that he hopes the weapons will spark disputes over “territories annexed by the United States in the American states of California, New Mexico, Arizona, Nevada, Utah, Colorado, and part of Wyoming,” providing a U.S. history lesson by invoking “the annexation of Texas in 1845, the negotiation of the Oregon Treaty with Great Britain in 1846, and the conclusion of the Mexican-American War in 1848, which ended with the signing and ratification of the Treaty of Guadalupe-Hidalgo in 1848.”

Congress passed legislation in December of 2014 allowing the U.S. to send arms to the Ukrainians, with President Obama signing the bill while noting that “it gave him leeway over whether or when to send arms.” Subsequently this spring, a group of U.S. senators were able to persuade the White House to agree to send military weaponry to Ukraine.

“It follows that the United States has no right to advise Russia [how] to behave with neighboring friendly people. Supply of arms [to] Ukraine will be perceived by us as a signal to the appropriate actions – we will begin delivery of new weapons Mexico to resume debate on the legal status of the territories annexed by the United States, which are now the US states of California, New Mexico, Arizona, Nevada, Utah, Colorado and Wyoming.

We reserve the right to conduct conferences in Russia, Mexico and the U.S. to raise the question of breaking away the above mentioned states from the U.S., and [about] supplying weapons to resistance fighters there,” Abdurakhmanov said.

While it seems unlikely that the Mexican government initiate a hot war with the United States, Abdurakhmanov  could very well be referring to arming the Mexican drug cartel and Islamic terrorists. Both of these groups are reported to be working together and the latter is reported to be ready to mount an attack from Juarez. The Fort Bliss Army base in El Paso has increased security in anticipation of such an attack.

Of course, Obama and Holder have already armed the drug cartel and taken over half a million acres in New Mexico with which an attack could be prepped for and initiated.

While it would take a lot more than the combined forces of the Mexican drug cartel and ISIS to defeat the U.S. military and highly armed populace, any attack could be used to usher in martial law.