Jade Helm As A Preparation For War In The Middle East 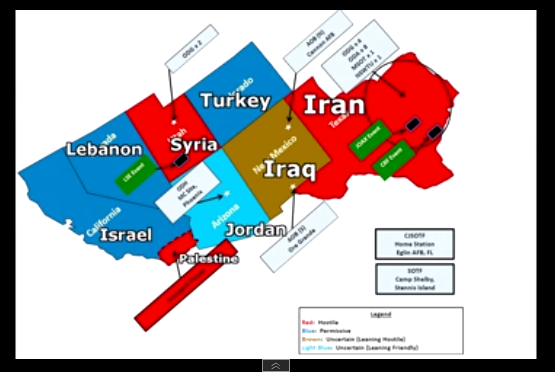 Another theory, put forth here by Paul Joseph Watson of Infowars, states that Jade Helm is a preparation for a large-scale invasion and war in the Middle East. The states involved in Jade Helm, and even their climates and geography, do match up nicely with counties in the Middle East. The operations to be conducted also line up with what would be a likely war scenario:

– Utah and Texas are declared ‘hostile' in the drill's document with a battle being fought in Syria/Utah and ultimate target being Iran/Texas.

– The friendly, blue states match up with the Middle East allies.

Of course, retired 4-Star General Wesley Clark told us all back in March of 2007, ““I just got this down from upstairs [the secretary of defense’s office], this is a memo that describes how we are going to take out seven countries in five years – staring with Iraq, and then Syria, Lebanon, Libya, Somalia, Sudan, and finishing off, Iran.”

We only lack Syria and Iran from that list.

MOVE ON TO PAGE 5 – Jade Helm Cover To Kill Off ‘Red List' of Patriots: