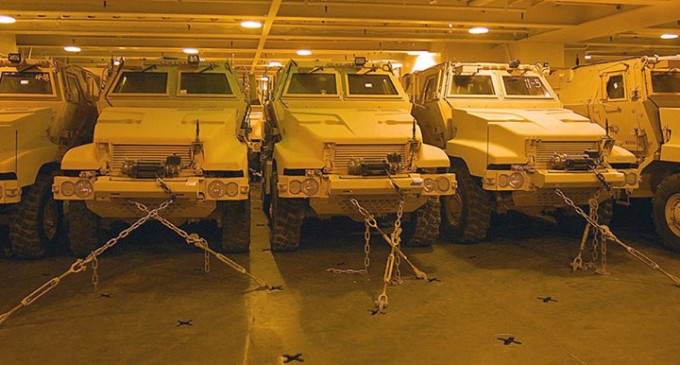 Ohio law enforcement has just received a number of mine-resistant vehicles, assault rifles, and a grenade launcher along with thousands of other equipment received over the past few years – courtesy of the Dept. of Defense.

Under the DOD’s 1033 program, law enforcement all over the country has been receiving military machines and arms, alerting many people of the coming attack on the American people by the Obama administration, as reported by the Washington Times.

If you would like to see if your city has received any military equipment under this program, check out this interactive map by the New York Times. Currently the south west seems to be the biggest beneficiary of military goods, assuming this is accurately reported.

This is all right out in the open now….

With our southern border completely open and terrorists coming in with ease – as Rick Perry recently surmised, which isn’t hard to do with things like an Urdu-to-English Dictionary being found at a border rancher’s fence, ISIS banner seen in Ferguson riots and ISIS tweeting threats within the States –   there will be attacks coming to America soon.

Their plan seems to be to impose martial law as the feds, military and local law enforcement fight foreign terrorists, like ISIS, and anyone who opposes the feds because they’re wise enough to know that the feds caused this problem in the first place (all you Conservatives, i.e. ‘domestic terrorists’) in order to instill a communist regime.

Ohio law enforcement agencies also successfully asked the Pentagon for a total of 743 rifles, 683 pistols, and 36 mine-resistant vehicles during the past eight years, according to DPS statistics. In 2008, the Delaware Police Department received an M79 grenade launcher to fire tear gas canisters.

The Cuyahoga County Sheriff’s Office received more than 30 M16 and M14 rifles between 2006 and 2008, according to state records. Cleveland Metroparks rangers were given 17 assault rifles in 2009 and received a number of flak jackets and night-vision goggles earlier this month.

Cleveland police, however, did not receive any surplus military equipment, according to a department spokeswoman.

The only Ohio county not to receive any military gear from the program since 2006 was Van Wert County, in the northwest part of the state, according to the New York Times.

Delaware Police Department spokesman Capt. Adam Moore said most of the equipment his department has received, including the grenade launcher, is available to police even without the 1033 program.

Delaware police also received several assault rifles and a mine-resistant vehicle for high-risk situations, such as an active shooter. But neither the guns nor the vehicle have yet been used, Moore said.

The equipment, he said, “is really used for the safety of the citizens, the safety of our officers, and it’s going to be very controlled and policy-driven on when and how it’s used.”

Moore said while there’s been a growing debate over whether police departments are becoming too militarized, that’s an issue for elected officials to decide.

Ohio law enforcement agencies also received thousands of items under the 1033 program that are not designed for fighting at all, including refrigerators, trucks, clothing, and office furniture.