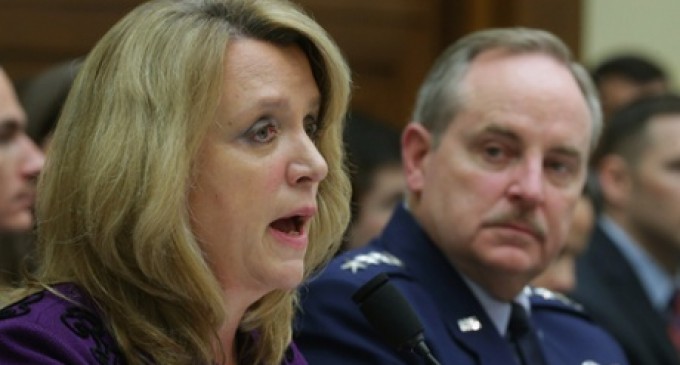 9 mid-level nuclear commanders have been fired at Malmstrom Air Force Base in Montana because they ‘failed to provide adequate oversight of their crew force,' who is accused of cheating on tests.

So a crew of military personnel are accused of cheating on exams, so they fire all the commanders who aren't even implicated in the cheating? Obvious hogwash.

This is the latest purge by the Obama administration, who has fired over 200 military commanders over the past 5 years. See our earlier post for an interview with Retired Army Maj. Gen. Paul E. Vallely, where he states that Obama's purging of the military is ‘Criminal And Treasonous'.

Obama is getting rid of all military commanders who don't agree with his agenda. A veteran Navy Seal reported last year that the Obama administration is giving a litmus test to commanders, which is ‘would you fire on Americans'. If the answer was no, they are fired. Dr. James Garrow, a former U.S. clandestine operative, makes the same claim.

In a bid to correct root causes of the missile corps' failings — including low morale and weak management — the air force also announced a series of new or expanded programs to improve leadership development, to modernize the three ICBM bases and to reinforce “core values” including integrity.

Air Force secretary Deborah Lee James, the service's top civilian official, had promised to hold officers at Malmstrom accountable once the cheating investigation was completed and the scope of the scandal was clear. None of the nine fired commanders was directly involved in the cheating, but each was determined to have failed in his or her leadership responsibilities.

Investigators determined that the cheating, which officials originally said happened in August or September last year, began as early as November 2011 and continued until November 2013, according to a defense official who spoke on condition of anonymity in order to reveal details before James' announcement. It involved unauthorized passing of answers to exams designed to test missile launch officers' proficiency in handling “emergency war orders,” which are messages involving the targeting and launching of missiles.

The most senior person touched directly by the cheating scandal was the commander of Malmstrom's 341st Missile Wing, Col Robert Stanley. He was permitted to resign, according to a defense official. The official described the air force actions on condition of anonymity before they were announced.

Nine key commanders below Stanley were fired, including the commanders of the 341st Wing's three missile squadrons, each of which is responsible for 50 Minuteman three nuclear missiles.

Also sacked were the commander and deputy commander of the 341st Operations Group, which oversees all three missile squadrons as well as a helicopter unit and a support squadron responsible for administering monthly proficiency tests to Malmstrom's launch crews and evaluating their performance.