This guy just couldn't contain his radical insanity anymore and had to be removed.  Sleeper cells  are suppose to remain asleep till awakened. Perhaps he skipped that part of the training. But there are plenty of Muslim Brotherhood members within our government to take his place. 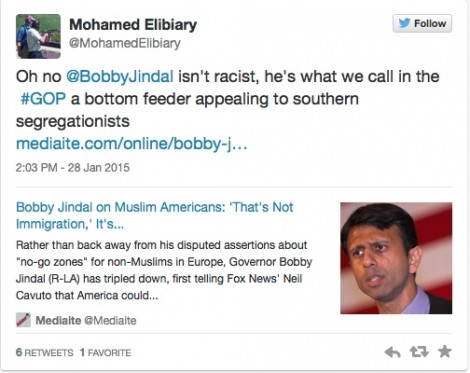 Before revisiting his Twitter meltdown, perhaps it’s useful to revisit some of Elibiary’s greatest hits:

So that provides some context for his hate-filled Twitter rant yesterday.

Elibiary began his meltdown by denouncing “guilt by association,” and then engaged in the very group scapegoating (“Christianist culture wars”) he had just condemned:

Then in a bizarre statement, he claimed that Islam is the driving force for the “Far Right” (presumably he means that hatred of the religion of Islam itself drives the “Far Right” — again another sweeping group indictment that he previously denounced):

He then launched into a rage about “Christianist subculture”:

“Christianist” is a slur invented by Leftist reactionaries to attack Christians who take their faith seriously and are politically involved. And yet if Elibiary’s co-conspirators at CAIR can denounce the use of the term “Islamist,” as they recently did, isn’t it equally bigoted and unfair to use the term “Christianist” to attack Elibiary’s perceived enemies?

But he continues, identifying “Christianist subculture” as a “problem” for Muslims, and presumably one that must be eradicated:

And again the attack continued, as he demonized a large group he had just identified in the millions as hateful and xenophobic:

Mohamed, if you find yourself gravitating towards a view that blames “Christianist subculture” broadly, then you’re lost.

But don’t dare call him out on his hypocrisy!

One is given to wonder what Elibiary’s reaction would be if someone were to simply modify his tweets to replace “Christianist subculture” with “American Islamist subculture.” Undoubtedly, he would froth at the mouth with rabid accusations of racism and “Islamophobia.”

This, however, is not remotely the first time that Christians have been the targets of Elibiary’s unbridled rage.

As I witnessed first-hand in Egypt last year, Elibiary’s Muslim Brotherhood allies sacked and burned down nearly 100 churches in August 2013 and launched an ongoing wave of terror targeting Copts and the government after the ouster of Morsi. During Morsi’s regime, attacks on Christians were commonplace, with the Muslim Brotherhood setting up torture chambers for Christian protesters right outside Morsi’s palace. When Christians were murdered in April 2013, a Muslim mob aided by Morsi’s police attacked the funeral service and mourners at the Coptic Cathedral in Cairo. So it’s no surprise that Christians overwhelmingly supported Morsi’s overthrow.

And the outrage of Coptic Christians is understandable when, despite all the contrary evidence, Elibiary tweets out this: 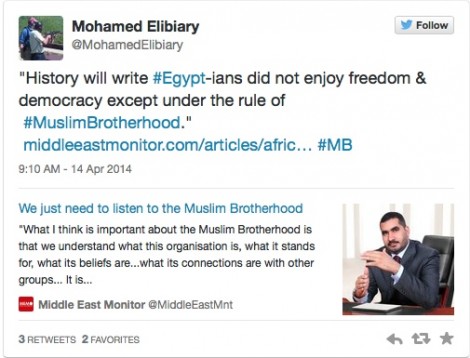 Clearly, it is long past time for Elibiary’s friends to stage a mental health intervention. And because he exhibits undeniable anti-Christian hatred and bigotry, he clearly has no place advising anyone in our government.