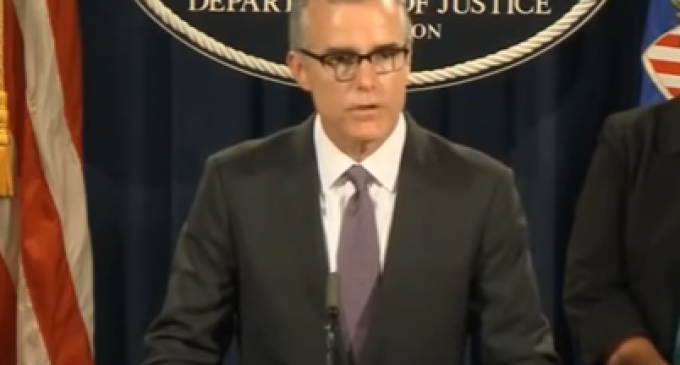 When FBI Director James Comey got fired earlier this week, Democrats began to wildly speculate about the cause of his termination. Elizabeth Warren blamed the Russians. Stephen Colbert claimed that Trump wanted to stop internal investigations into his presidency. But both theories fail to acknowledge the man what would take charge of the FBI in Comey's absence.

While Comey has angered politicians on both sides of the isle, he is at least nominally a Republican. He's registered as a member of the GOP but did not disclose his preference in the 2016 election — an understandable omission given the political minefield his position had become during the campaign.

FBI Deputy Director Andrew McCabe, on the other hand, has well-documented ties to the Democratic party — despite his best efforts to cover them up. Now that Comey's been fired, McCabe is in charge.

So the idea that Trump ousted Comey in order to install a loyalist as the head of the FBI doesn't exactly hold up to scrutiny. While McCabe's position will no doubt be temporary, he certainly has the time and will to expose Trump — if the president had something to hide. But a combination of the aforementioned factors makes that scenario unlikely at best.

Learn about McCabe's hidden ties to the Democrat party on the next page: