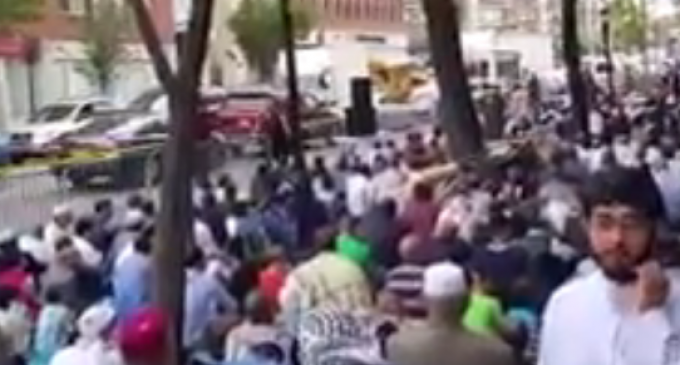 For non-Muslim, this very chant conjures the images of terrorists killing innocent people, screaming this phrase, and dedicating their terrorist act to Allah.  On the heals of the San Bernardino attack, these images don't help the non-Muslim feel there is a difference between a Muslim chanting a prayer to Allah and a radical Muslim dedicating his or her kill to the same god.

This type of passive aggressive intimidation, protected by CAIR and Obama's DOJ, the American public must accept this behavior or be deemed racist.  Truth and Action reported on another public display of Islamic culture in New York City, last September.

This past September Muslims took to the streets of New York City in what was suppose to be a moderate display of their religion. Instead, there were very graphic scenes of terrorism, like a white woman being hung with a noose, people carrying a banner that had eliminated Israel from the map, women being held in cages as in Boko Haram, etc

On the next page, view the chilling video of Brooklyn streets, turned into an open air Mosque.