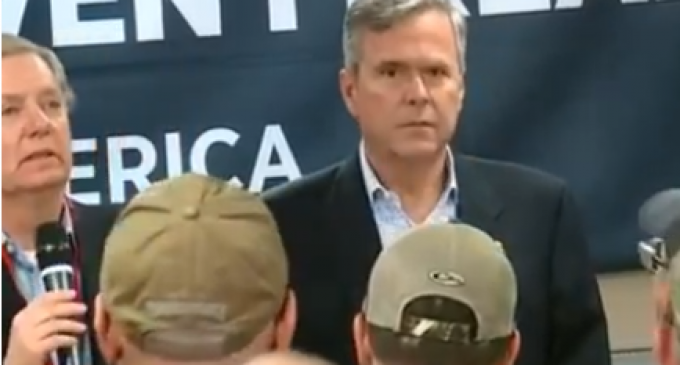 Oh, Jeb. Poor, poor Jeb. Even when making a joke, Jeb Bush manages to fall flatter than, well, his own poll numbers.

In a recent town hall with South Carolina Senator Lindsey Graham, the Senator asked if there were any Democrats in the room. There weren't many, but apparently Jeb was one of them.

He rose his hand — an apparent stab at humor — but it wasn't a good visual for the man who has fought for his entire campaign that he is a true conservative, despite his liberal positions on Common Core, immigration, and refugees.

Jeb, a self-described introvert, has really struggled to provide a compelling conservative picture for his campaign, as his low energy, humorless town halls have gone so poorly that Jeb now famously has had to ask the attendees to clap for him when met with total silence.

See more awkward Jebisms on the next page: