The Obama administration has shown itself to be one of the most ruthless and lawless administrations in United States history. And Senator Harry Reid, Democrat minority leader and one of the most corrupt politicians ever, is threatening those who would stand up to the Bureau of Land Management and the federal government. The reason is that there is a huge pile of money that the government and Reid personally stand to make due to these land grabs, and it is just now coming to light.

In the case of the Oregon ranch standoff, it appears that there is a large uranium ore deposit in the areas contested by the ranchers. It also seems that Russia may be involved, and the government would be more than happy to take possession of the now valuable parcels in order to sell the rights to the highest bidder. With about two dozen ranchers jailed, and the two ranchers charged with arson in danger of filing for bankruptcy during their five year incarceration, it is easy to imagine the Bureau of Land Management making a rock-bottom offer in order to seize the valuable parcels and then offering it to the Russians or a shell corporation at a high price. This would not be the first time they have conducted such an underhanded and dishonest scam, and it will not be the last.

And then there is Harry Reid, a wealthy operator who cannot really explain how he obtained his wealth. But he is angling for more, and he may very well pull this off as well.

Senate Minority Leader Sen. Harry Reid (D-NV) is reportedly hoping the federal government—specifically President Barack Obama’s administration—will grab a stretch of land in Southern Nevada near the infamous Bundy Ranch, now that many in the Bundy group are in federal custody.

Senator Reid appears to be attacking the Bundy family and their supporters, who he previously called “domestic, violent terrorist wannabes” while adding to his legacy.

Reid has indicated that the charges against the Bundy family and their supporters are not over, and although the BLM had promised to work with the ranchers and minimize charges if they would stand down, it appears that they are going to renege and go for the maximum charges against the maximum number of people. So far, 52 ranchers have been run out of business, many will be locked up indefinitely, and new evidence is surfacing in Nevada that money is playing a major role in this illegal operation, with Harry Reid in line to make millions or even billions.

Reid Bunkerville, LLC holds 93 parcels in Nevada. It appears that a Chinese energy firm is interested in developing a gigantic solar energy station or stations on some Reid’s parcels and some of the BLM land that Bundy was running his cattle on. However, the solar development apparently is “not durable with trespass cattle,” meaning simply that the BLM and Reid must get rid of ranchers who either own property in the area or who graze cattle on the BLM property in order to make sure the solar installation will be built and maintained.

Once again, it is important to remember that the federal government is supposed to be constitutionally prohibited from owning land out side of Washington D.C., save for military bases and ports. Unfortunately, Barack Obama and his Democrat henchmen have turned the United States into a banana republic where the Democrat elite and the insiders get all the goodies, and average citizens get only tax increases and increasingly draconian rules and policies.

It seems increasingly likely that a second declaration of independence and revolution may be necessary to seize the nation and to return it to the citizens. In these two cases, however, it is clear that the corruption is deep and simply following the money explains why the government has been so willing to oppress ordinary citizens of this nation. 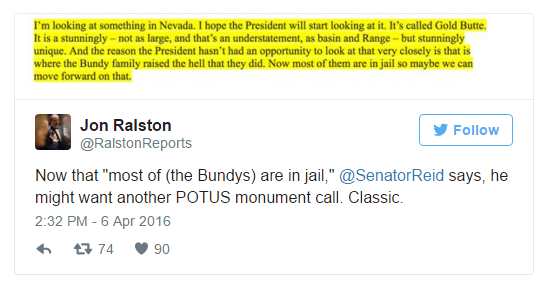