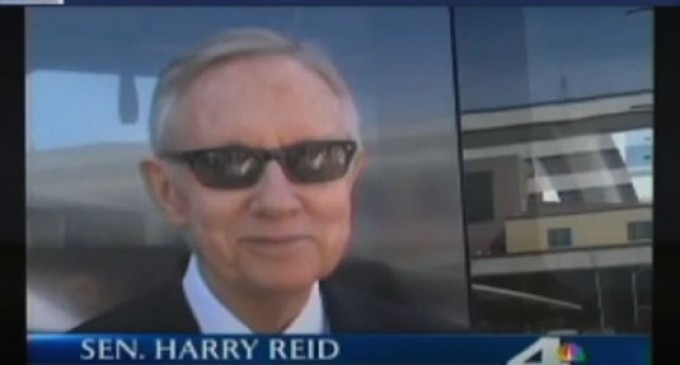 After days of suspicious silence, Senator Harry Reid (D-Nevada) was willing to say a few words about the Bureau of Land Management's dispute with cattle rancher Cliven Bundy.

“Well, it’s not over. We can’t have an American people that violate the law and then just walk away from it. So it’s not over,” Reid told News 4.

Despite telling the Bundy family that a deal had been reached Saturday after federal agents were forced to retreat, the BLM reversed its promise Monday and told reporters that they planned to go after Bundy “administratively and judicially.”

“The door isn’t closed. We’ll figure out how to move forward with this,” BLM spokesman Craig Leffsaid. “The BLM and National Park Service did not cut any deal and negotiate anything, there was no deal we made.”

Unsurprisingly, reporters made no attempt to question Reid regarding his involvement after anInfowars report linked Reid to the attempted Bundy land grab.

The most read news story in the world Friday, Infowars reporter Kit Daniels revealed documents linking Reid and the BLM’s director, Reid’s former senior adviser, to a Chinese energy firm that has been working to remove Bundy from his home in order to install solar panel power stations.

“Non-Governmental Organizations have expressed concern that the regional mitigation strategy for the Dry Lake Solar Energy Zone utilizes Gold Butte as the location for offsite mitigation for impacts from solar development, and that those restoration activities are not durable with the presence of trespass cattle,” one document states about Bundy’s cattle.

Fresh off the historic victory, which saw federal agents back down to Americans and return nearly 100 cattle, Bundy supporters remain on scene, awaiting the federal government’s next move.