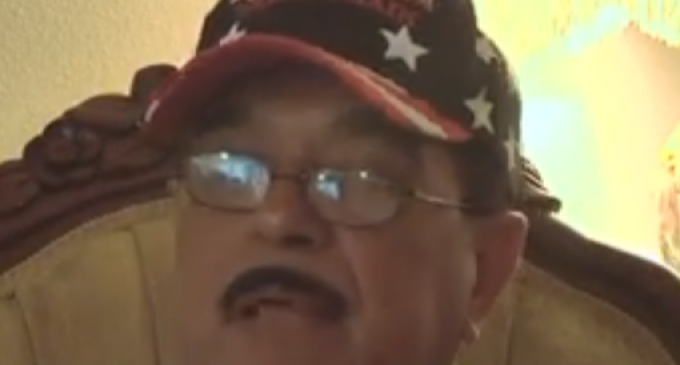 The visceral hate toward Donald Trump and those who support him was shown toward an Army veteran who was wearing a “Make America Great Again” hat.  While shopping at Sam's Club, Ricardo Garcia, a man of sixty-seven-years, sneezed while waiting at the meat counter.

The gentlemen to his side, said, “Bless you”, but another man glared at Garcia and said, “I can not give you a blessing because you're wearing that stupid hat.”

In confusion, Garcia slowly replied, “What's wrong with the hat?” and the Trump hater replied, “That's a Trump hat.”

Replying back with snark, Garcia said, “This isn't a Trump hat, this is my hat.” He then turned away from the man and crossed his arms, attempting to avoid the political debate the hostile man wanted to have with him.

What happened next is reminiscent of other attacks by Trump haters.  The vile behavior that those on the left exhibit is staggering.  From protesters outside the RNC that threw urine on people to individuals like Dr. Cornell West and Carl Dix, the co-founder of the Revolutionary Communist Party of Chicago who insight violence, the moral standard is obsolete on the left.

“These guys have been known to go around to all of these different hot issues in these different cities and they are the ones who insight violence. These guys are part of so much of the chaos we see in the country and today they will be downtown with Black Lives Matter, the Huey P. Newton Gun Club, which openly marches around saying, “Oink, oink, bang, bang, kill cops, pigs in a blanket…”

Because the leadership on left, including Obama, protects this type of behavior, calling it a peaceful demonstration, it is no wonder a Trump supporter got assaulted just for wearing a Trump hat.

Garcia's interview and more of the story may be found on the next page.