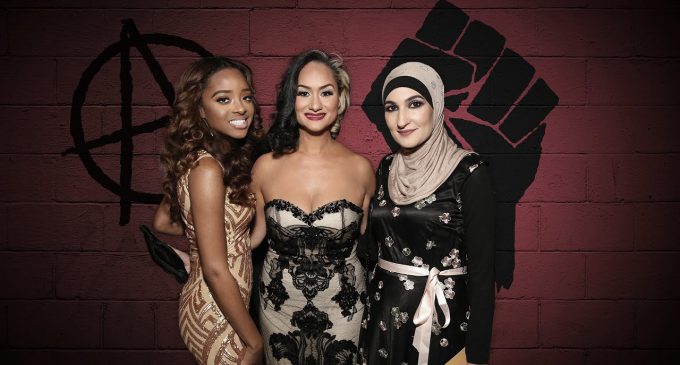 Have you ever wondered if all those big talking feminist leading the Women’s Marches were all actually secretly submissive?

And not in a dirty way. Just in that, they’re as stereotypical as one could get in regards to traditional misogynistic cliches of women.

Tamika Mallory, Linda Sarsour, and Carmen Perez make a very pretty trio and are indisputably very good little slaves. They know the needs laid out for them by their elderly domineering Masters, and willing to risk their lives if need be to please them.

That is what makes this trio so deadly despite their own apparent cover of illogical stupidity masking their true agendas.

Women have the gift of appearing to come off more innocent and commanding on matters concerning the family. As if they possess some sort of wholesome authoritative power uniquely gifted through the role of motherhood, which they very well might.

As such the weight of a mother crying that her son’s father died due to needless gun violence strikes a far deeper chord than the raging race fueled ramblings of her master, and mentor, Al Sharpton. And let’s not forget that in correlation to the population Blacks were far more likely to be slave owners in the South during the height of slavery. A very interesting and often overlooked factor in the black-on-black violence we continue to see today. And for you pansies out there – these are both just statistical facts, sad yes, but nonetheless facts. And if you’re going to keep reading this you’re going to need to switch out that liberal diaper for some big girl panties, and no you’re not going to pin the diaper pins instead to your shirt.

The left likes to make absurd leaps of logic and connect dots that leave even conspiracy theorists scratching their heads. Have we ever wondered why Sharpton and Farrakhan keep sending these supposedly independent feminists to go attack any woman who publicly demonstrates intelligence or having a mind of her own by downplaying her maternal sensibilities?? Few know it but Sharpton and Farrakhan are behind this trio of fallen feminist Angels attacking Dana Loesch for doing an ad with the NRA. Learn more about Sharpton and Farrakhan ties to the Women’s March and this ferocious attack against Loesch on the next page: