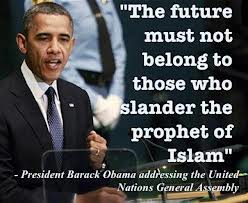 Radical Islam has openly declared war on the West with the strategy to infiltrate countries and multiply in order to achieve a global Caliphate. And, they've done a great job so far.

Our entire government is laced with these jihadists at the highest levels – including the highest office as Obama is hell bent on importing as many of his brethren as he possibly can. This is why dozens of Islamic jihadist training camps are permitted to operate within our borders.

While America slept, the Muslim Brotherhood has infiltrated our schools and our communities. We've got everything from school kids being told to recite the Pledge of Allegiance as ‘one nation under Allah' to restaurants being pressured out of selling bacon.

Protests in European countries see numbers in the hundreds of thousands marching in defiance of Islamization while radicals who can't sit on their hands any longer start physically assaulting Christians. You see, there seems to be an unstated agreement between the jihadists within Islamic communities on ‘infidel soil' on how to progressively step up their Caliphate, a pattern that can be easily demontrated.

According to Charlie Hebdo's lawyer, the new edition will also feature other cartoons with the Prophet Muhammad, and will be making fun of politicians and other religions.

One newspaper vendor in central Paris said he had already received 200 advance orders for Wednesday's issue and was stopping there as he could no longer manage any more, Reuters reported.

Ahead of the publication of the new issue of Charlie Hebdo, the French Council of the Muslim Religion and the Union of French Islamic Organizations released a joint statement calling for Muslims to “stay calm and avoid emotive reactions” to the magazine.

France's Islamic council has urged the government to reinforce protection of mosques, saying that at least 50 anti-Islamic acts had been reported since the deadly attack. The head of the National Observatory against Islamophobia, Abdallah Zekri, reportedly complained that Muslim sites such as Paris's main mosque were not being provided with the same level of security as Jewish synagogues and schools.

Many fear that the three days of bloodshed in France will add fuel to the fire of anti-immigrant sentiment in Europe.

On Monday, up to 25,000 anti-Islamist protesters marched through the German city of Dresden, shouting and brandishing anti-immigrant placards.

Charlie Hebdo’s past caricatures of the Muslim prophet prompted last week’s deadly shootings when two French-born brothers of Algerian origin, Cherif and Said Kouachi, attacked the offices of the satirical weekly over the publication of cartoons mocking the Prophet. The attackers entered Charlie Hebdo’s headquarters in Paris on January 7 and killed 12 people, including the chief editor and five key cartoonists. The massacre has provoked a debate on free speech in France and elsewhere. France has promised to deploy 10,000 soldiers by Tuesday as well as nearly 5,000 extra police officers to protect sensitive sites, such as Jewish schools and Synagogues, at the same time hunting for accomplices to the Islamic militants. On January 9, four hostages and another gunman were killed during a siege at a kosher grocery in Paris. According to French police, six members of a terrorist cell involved in the attacks may still be at large. eople hold panels to create the eyes of late Charlie Hebdo editor Stephane Charbonnier, known as “Charb”, as hundreds of thousands of French citizens take part in a solidarity march (Marche Republicaine) in the streets of Paris January 11, 2015. (Reuters/Charles Platiau)

France has the European Union's largest Muslim and Jewish communities. The country saw the largest demonstrations in history on Sunday when about 1.5 million people marched in Paris, over 40 world leaders among them, and 2.5 million more in the provinces to show solidarity with the 17 victims of multiple attacks last week.