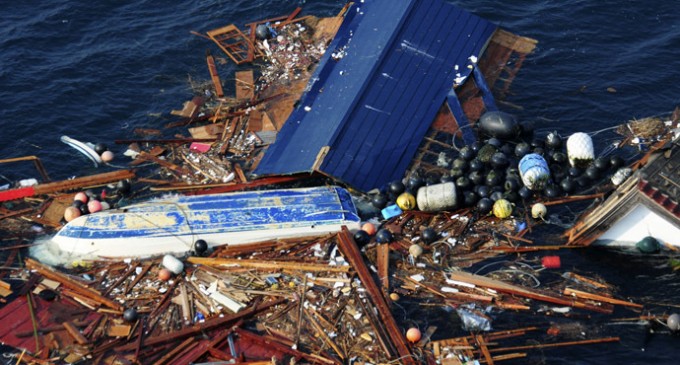 “The answer is ‘yes,’ there is a real threat,” states John Chapman of the Oregon State University’s Marine Bioinvasion Lab. “These [creatures] have the potential to invade local habitats.”

First scientists predicted that marine life and debris couldn’t make it all the way to the West Coast from Fukushima in any great number, but unfortunately they have been proven very wrong.

Entire docks have wash up on our West Coast as well as 150 marine species have arrived since last year.

According to marine biologist Steve Rumrill, of the Oregon Department of Fish and Wildlife (ODFW),  the two worst invaders are Wakame, which a seaweed native to Japan that began reproducing as soon as it arrived in America, and the Northern Pacific seastar, which he describes as a voracious predator that could decimate local shellfish populations.

Of course, the taking over of our coast by species not indigenous to our region isn’t the only threat. As we posted last month, radiation levels are being recorded by residents in California and Missouri as the Fukushima plant continues to spit out radiation, as their website has admitted.

We strongly suggest you find a good nascent iodine supplement to protect you and your families thyroid. The mainstream media will not tell you the true status of this disaster, which is certainly far from ‘over’.

While winter storms have plunged temperatures across various parts of the United States, the West Coast is bracing itself for an altogether different – yet still very unwelcome – set of seasonal hazards: invading marine life from Japan.

Almost three years after the Tohoku earthquake and tsunami ravaged Japan’s east coast and set off the Fukushima Daiichi nuclear disaster, dislodged debris from the site is still washing up onto American shores. Yet while scientists have downplayed the possibility that the wreckage is contaminated with radiation, they are keeping their eyes peeled for hostile sea creatures hitching rides from across the Pacific.

“The answer is ‘yes,’ there is a real threat,” John Chapman of the Oregon State University’s Marine Bioinvasion Lab told RT in an interview, noting that well over 150 marine species have arrived on the coast over the last year. “These [creatures] have the potential to invade local habitats.”

Currently, government agencies across California, Oregon, and Washington are drafting comprehensive surveys of their coasts in an attempt to determine exactly what species have reached their shores and which, if any, have been able to successfully establish themselves in local habitats.

“We’re still in the discovery phase,” Chapman said. “We’re still getting lots of debris” and even more is expected to arrive during the winter season, which is typically when the majority of the rubble washes ashore. Scientists previously believed that native Japanese marine life could not survive the voyage across the Pacific Ocean, but the results have proven quite the opposite.

“We’ve been wrong on all our predictions so far,” Chapman said.

Over the last two years, entire docks have made their way to the shores of Oregon and Washington, housing dozens of non-native marine life. Meanwhile, other instances have seen fishing vessels surface with entirely different communities of life onboard. Already, scientists and researchers have pinpointed a number of potentially hazardous arrivals.

According to marine biologist Steve Rumrill, of the Oregon Department of Fish and Wildlife (ODFW), two species discovered in the state were on the Global Invasive Species Database’s list of the world’s 100 worst invaders: Wakame, a seaweed native to Japan that began reproducing as soon as it arrived in America, and the Northern Pacific seastar, which he described as a voracious predator that could decimate local shellfish populations.

Their arrival was a “very high risk, high threat event,” Rumrill said. Chapman also singled out these two species in his list, in addition to the Asian Shore crab and the Mediterranean blue mussel, which could potentially transport disease and cause other problems for local wildlife.

While California and Washington have both encountered their share of debris, its Oregon that bears the heaviest burden. The state receives the most debris out of the three, and complicating its ability to properly respond is that it’s impossible to predict where on its nearly 400-mile coast debris will land. Since all of the state’s beaches are publicly owned, it relies on local residents to call in and report debris or invasive species when they’re found.

Meg Kenagy, a spokeswoman for ODFW, told RT the state could be getting tsunami-related debris for another 10 years, but that the department is prepared to deal with the situation. Both Rumrill and Kenagy emphasized the response times of the state’s agencies, which involve arriving at the scene as quickly as possible and removing potential invaders.

“We want very quickly to get everything off the beach and out of the water,” Kenagy said, at which point officials eliminate the various species in a few different ways, ranging from collecting and burying the wildlife in a landfill where they cannot establish themselves to throwing them into the trash.

So far, Rumrill stated there’s no sign any species has yet to establish itself on the West Coast. However, even the fastest response times may not be enough when objects like docks – a “Noah’s Ark” of species – land onshore. As Chapman noted, despite ODFW and the Parks and Recreation Department reacting as fast as possible to the dock that landed in 2012, officials were only able to get about 40 percent of the wildlife onboard.

Preventing the wildlife from expanding its presence is the top priority for state officials, since non-native communities are extremely difficult to get rid of once they settle down.

“There are few success stories once [a species becomes] established,” Chapman said, noting that in the past it has cost millions of dollars to remove one type of invasive species from a single body of water.

Strategies for dealing with an established presence also vary, from physical removal of the species by divers to chemical applications such as bleach and herbicides to biological pest control. A particularly drastic example has been underway in Guam, where the US has dropped thousands of dead mice stuffed with deadly painkillers in an attempt to lure in and kill of the island’s invasive brown tree snake.

Last year, the National Oceanic and Atmospheric Administration raised the eyebrows of scientists and residents alike when it seemed to suggest an “island” of debris from Fukushima was slowly making its way to the West Coast of the United States. Scientists speculated that it could be home to numerous non-native species, but NOAA then clarified its report by adding there was “no solid mass of debris from Japan heading to the United States.”