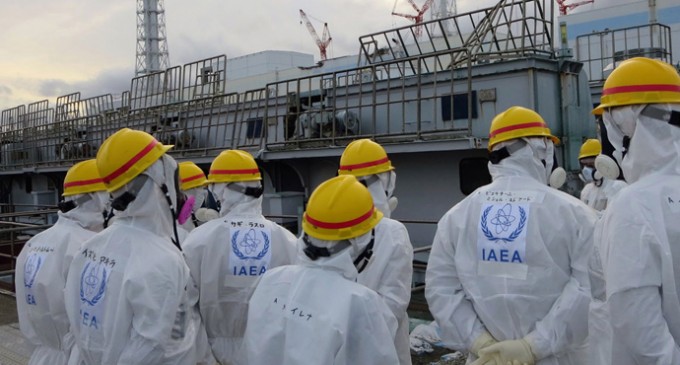 Large plumes of radioactive steam have come out of reactor 3 from the Fukushima plant this past December.

The steam was spotted on December 19th, 24th, 25th, and the 27th, according to a report TEPCO published on its website.

It’s unclear what danger this actually represents to US citizens. Some reports state it will hit or has already hit the west coast of the US.

One thing is for sure, TEPCO, the company that has been handling the crisis, has not been very forthcoming with information as to the real status of this catastrophe and only recently admitted it needed international help.

There continues to be no coverage of the ongoing Fukushima treat in US mainstream media.

Fresh plumes of most probably radioactive steam have been detected rising from the reactor 3 building at the crippled Fukushima nuclear plant, said the facility’s operator company.

The steam has been detected by surveillance cameras and appeared to be coming from the fifth floor of the mostly-destroyed building housing crippled reactor 3, according to Tokyo Electric Power Co (TEPCO), the plant’s operator.

The steam was first spotted on December 19 for a short period of time, then again on December 24, 25, 27, according to a report TEPCO published on its website.

The company, responsible for the cleanup of the worst nuclear disaster since Chernobyl, has not explained the source of the steam or the reason it is rising from the reactor building. High levels of radiation have complicated entry into the building and further inspection of the situation.

Three of the plant’s reactors suffered a nuclear meltdown in March 2011 after the Great East Japan Earthquake and resulting tsunami hit the region. The plant is comprised of six separate water boiling reactors. At the time of the earthquake, reactor number 4 had been de-fueled and reactors 5 and 6 were in cold shutdown for planned maintenance, thereby managing to avoid meltdowns.

In a similar incident, small amounts of steam escaped from the reactor 3 building in July 2013, Asahi Shimbun reported. However it was unclear where the steam came from. TEPCO said that radiation levels did not change, adding that the steam could have been caused by rain that found its way to the primary containment of the reactor, and because this vessel was still hot, the water evaporated. On 23 July the steam was seen again coming out of the fifth floor just above the reactor containment, the Japanese newspaper reported.

In November, TEPCO, responsible for the decommissioning of the plant, began the highly risky removal of over 1,500 potentially damaged nuclear fuel rods from reactor 4. The reactor is the most unstable part of the plant as it was offline at the time of the 2011 catastrophe and its core didn’t go into meltdown. Instead, hydrogen explosions blew the roof off the building and severely damaged the structure.One of the most dangerous operations attempted in nuclear history was a success as a total of 22 assemblies containing 50 to 70 fuel rods have been transported to a new storage pool. While the extraction of the fuel rods is a significant challenge for TEPCO, a more complex task of removing the cores of the stricken reactors is yet to come.

The Department of Health and Human Services has ordered 14 million doses of potassium iodide, the compound that protects the body from radioactive poisoning in the aftermath of severe nuclear accidents, to be delivered before the beginning of February.

According to a solicitation posted on the Federal Business Opportunities website, the DHHS asks contractors to supply, “potassium iodide tablet, 65mg, unit dose package of 20s; 700,000 packages (of 20s),” a total of 14 million tablets. The packages must be delivered on or before February 1, 2014.

Potassium iodide helps block radioactive iodine from being absorbed by the thyroid gland and is used by victims of severe nuclear accidents or emergencies. Under current regulations, states with populations living within 10 miles of a nuclear plant are encouraged, but not required, to maintain a supply of potassium iodide.

A search of the FedBizOpps website returns no other results regarding the purchase of potassium iodide from any government agency, suggesting that the DHHS bulk buy of the tablets is unprecedented in recent times.

The ongoing crisis at the Fukushima nuclear power plant has prompted concerns that the purchase is connected to the threat posed by radioactive debris washing up on the shores of the west coast or the potential for another natural disaster occurring in Japan which could impact the U.S.

“Governments usually respond to disasters very similarly; first move is to avoid panic,” writes The West Wire. “The Japanese didn’t want to panic the world, or tarnish their honor and now, as a consequence of their reluctance, Japanese citizens and international aid personal find themselves in a horrible state of being.”

“Panic is usually avoided by keeping their citizens as blind to the truth as possible, until confrontation with the truth becomes inevitable. The crucial question at this juncture; “would our government be reluctant about warning us of potential disaster, in an attempt to avoid panic?” 14 million doses of Potassium Iodide say that might just be the case.”

Last month it was revealed that 71 U.S. sailors who helped during the initial Fukushima relief efforts are suing the Tokyo Electric Power Co. (TEPCO) after they returned with thyroid cancer, Leukemia, and brain tumors as a result of being exposed to radiation at 300 times the safe level.

TEPCO has repeatedly been caught lying in their efforts to downplay the scale of the disaster. In September it was confirmed that radiation readings around the power plant were 18 times higher than previously reported by TEPCO. After a tank leaked 300 tonnes of toxic water in August, groundwater radiation readings at the plant soared to 400,000 becquerels per litre, the highest reading since the nuclear accident occurred in March 2011.

Top scientists have warned that if another major earthquake hits Fukushima, which is almost inevitable, it would mean “bye bye Japan” and the complete evacuation of the west coast of North America.