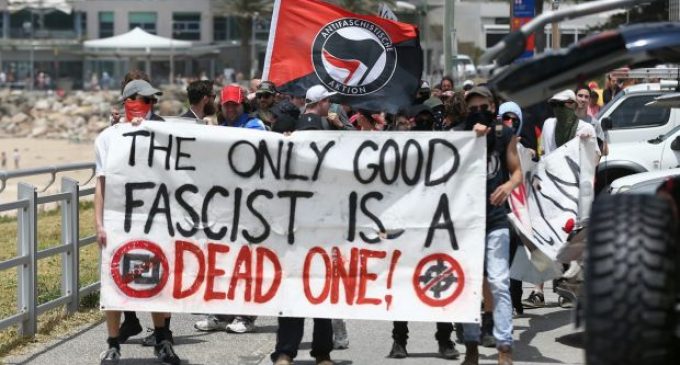 Don’t let Antifa and the MSM trick you into believing their violent rallies and attacks are “triggered” by Trump supporters or alleged white supremacist nationalists.

THIS NIGHTMARE MUST END

Screams the flier subtitle implying the Presidency of Donald J. Trump is the worst thing to happen since the rise of Adolf Hitler and the Nazis. That and Christians being allowed to live peacefully in America as outlined in the Constitution.

Antifa is calling for premeditated violence against Patriots, Christians, and the folks enforcing the Constitution and the laws of the land. A new flier being handed out across the U.S. demands people take to the streets with weapons to stop the fascist Trump/Pence regime and all of their supports, through any means necessary.

Our protest must grow day after day and night after night—thousands becoming hundreds of thousands, and then millions—determined to act to put a stop to the grave danger that the Trump/Pence Regime poses to the world by demanding that this whole regime be removed from power.

Don’t be fooled. This isn’t the time Antifa brought knives to fight Patriots. Their masters are wising up. Antifa held a mass training session Saturday, August 19th preparing for the big event hosted by chapters throughout the U.S. An event members are bragging will put the Black Lives Matters protest in Ferguson to sham. And all this violence they believe will be justified and they will go down in History as heroes for defending the U.S against closet Nazi’s like President Trump. Don't forget this is a protest group deemed a domestic terrorism organization by the New Jersey DHS and connected and led by Barack Husain Obama and Bill Ayers.

Head on over to the next page to get the date, cities, and the rest of the scope of this upcoming hard-left/socialist/Antifa riot to take out the president