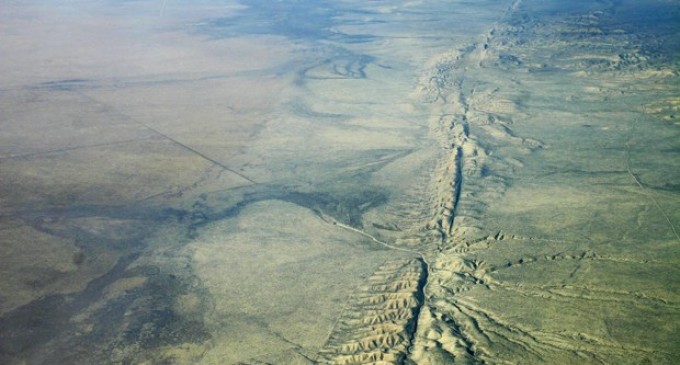 In a new finding utilizing GPS data, the San Andreas Fault has a 125-mile-wide “lobe” of “uplift and subsidence”.  For years, vertical motion had been ignored because of the difficulty in interpreting the “noisy data” in tectonic investigations.

Crustal movement has been predicted using computer models simulating the San Andreas Fault System, but this new data shows vertical lift.  EarthSpope Plate Boundary Observatory GPS data showed that over the past several years, the lobes that are on either side of the fault line have annual movement of a few millimeters.

Researcher Samuel Howell described it, “We were able to break down the noisy signals to isolate a simple vertical motion pattern that curiously straddled the San Andreas fault.”

With the recent seismic activity in California and Yellowstone, this type of modeling will be helpful in determining when and perhaps where along the San Andreas, the Big One could hit.

The 5.2-magnitude quake in Borrego Springs,  woke up many sleepy Southern California homes.  This quake was followed by 800 aftershocks.  This number is abnormally high for aftershocks.

Head northeast, toward Yellowstone National Park and Montana, where just this past week, several quakes have hit the region.  A magnitude 3.7 quake hit on June 9th, magnitude 4.3 on June 13th and on June 15th, a magnitude 4.0 shook the region.

Though Yellowstone is hit by earthquakes all the time, as it sits upon the Yellowstone super volcano, most of these quakes are extremely small.  These higher magnitude quakes are unusual and disconcerting.

Drills are being conducted in the Pacific Northwest to prepare the area for an unprecedented earthquake disaster.

Learn more about this “new modeling technique to “break down the noisy signals to isolate a simple vertical motion pattern that curiously straddled the San Andreas fault”, on the next page.