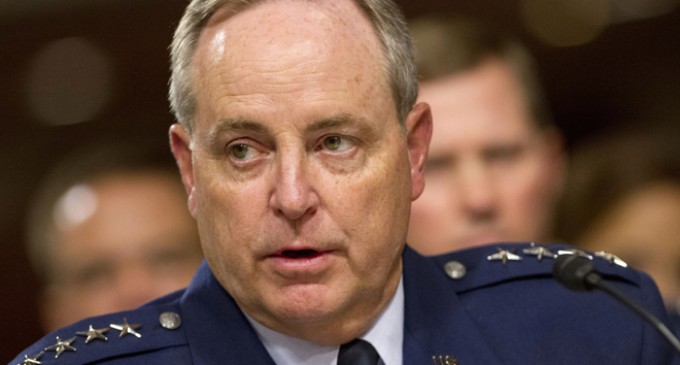 34 nuclear missile officers from the Air Force has been fired due to a ‘cheating scandal'.

Supposedly, the officers texted each other the answers to a monthly test of how to operate nuclear missiles.

The cheating was discovered during a drug investigation that included two of the 34 officers.

As we reported in another post, this is in addition to 197 total officers, including some of the highest level commanders, that have been fired during the years that Obama has taken office.

Some of the reasons seem downright ludicrous, like ‘playing with fake poker chips' and ‘mishandling their weapon'.

This has never happened in the history of our country!

Retired Army Maj. Gen. Paul E. Vallely states Obama is getting rid of any top commander that won't adhere to his socialist agenda.

Former Navy Seal Ben Smith, claims that commanders are asked if they will fire upon Americans and if the answer is no, they are fired.

The officers apparently texted to each other the answers to a monthly test on their knowledge of how to operate the missiles. The number includes who did the cheating as well as those who may have known about it but did not report it.

The cheating, which was discovered during a drug investigation that included two of the 34 officers, is the latest controversy involving the service members who maintain and operate the nation's 450 nuclear missiles.

James told a Pentagon news conference that 600 missile crew members across the Air Force were retaking the test, including nearly 200 at Malmstrom. She said that the missile force needs attention and that while immediate corrective action is being taken, Air Force leaders are planning to address some longer-term initiatives.

“Earlier today, Secretary of the Air Force Deborah Lee James briefed Secretary of Defense Chuck Hagel on allegations that several dozen ICBM officers cheated on their proficiency tests,” Pentagon press secretary Rear Admiral John Kirby said in a statement. “Secretary Hagel was deeply troubled to learn of these allegations, and he strongly supports the aggressive steps the Air Force is taking in response to them.”

Last week the Pentagon disclosed the original drug probe of a total of 10 officers — nine lieutenants and one captain — at six bases. It provided few other details beyond saying the officers were suspected of possessing “recreational drugs.” That has now expanded to 11 officers.

The matter is being probed by the Air Force Office of Special Investigations.

The Associated Press has reported that the Air Force's nuclear arm has been weighed down by a series of problems involving security lapses and morale-related issues, leading one officer to complain of “rot” in the force.