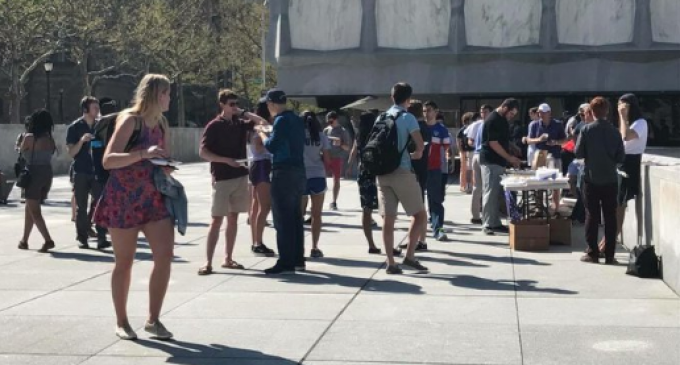 Yale University, one of the original Ivy League colleges, is once again in the headlines.  Most of you may be thinking that they are hosting another terrorist speaker like Sheikh Rachid al-Ghannouchi, the head of Tunisia’s Islamist Ennahda Movement, who called for the murder of U.S. troops and who was banned from the United States for supporting Hamas.

Or perhaps you might be reminiscing about John Yoo who graduated with a law degree from Yale only to later be sued by convicted terrorist Jose Padilla, represented by none other than lawyers at…Yale!

Maybe, you may even be stretching your memory back a bit to the time Yale hosted the “Black Panther Party” to celebrate Black History Month.

Of course, you could come to the recent headlines where a Yale professor allowed his students to skip class the day after Trump was elected because of the “trauma to the children.”

Well, believe it or not, Yale is not in the news because of some crazy Leftist rant or for attempting to shut down some Conservative in an anti-Free Speech protest.

Recently, a group of student teachers voted amongst themselves to unionize and in February did so under Local 33, a subgroup of the international labor union UNITE HERE.

Yale University decided that they would delay negotiations with the student teachers group because it did not recognize or wish to legitimize the new union.

In response, the 8 student teachers decided to go on a public hunger strike in order to shame Yale University into capitulating to their demands.

In fliers distributed before the strike, the organizers asked others to participate with them in solidarity, urging people to “sit with us and lift our spirits,” and “[join in] when one of us cannot continue.”

[Aaron] Greenberg also attacked the university for “siding with Donald Trump over members of their own community” by taking an anti-union stance.

Greenberg is the Local 33 Chairman and is referring to the fact that the University opted to wait until Donald Trump appoints a new batch of anti-union members to the National Labor Relations Board (NLRB).

As the “hunger strike” began in tents outside of the Yale University president's house, campus Republican students decided to poke a little fun at the striking teachers.

Read on to hear about their show of “solidarity” with their Leftist compatriots.