The P.C. police are claiming their latest victims. No longer satisfied by going after innocent adults, now they're coming after the children.

An elite Manhattan school is teaching white students as young as 6 that they’re born racist and should feel guilty benefiting from “white privilege,” while heaping praise and cupcakes on their black peers.

Administrators at the Bank Street School for Children on the Upper West Side claim it’s a novel approach to fighting discrimination, and that several other private New York schools are doing it, but even liberal parents aren’t buying it.

They complain the K-8 school of 430 kids is separating whites in classes where they’re made to feel awful about their “whiteness,” and all the “kids of color” in other rooms where they’re taught to feel proud about their race and are rewarded with treats and other privileges.

“Ever since Ferguson, the school has been increasing anti-white propaganda in its curriculum,” said a parent who requested anonymity because he has children currently enrolled in the school.

Bank Street has created a “dedicated space” in the school for “kids of color,” where they’re “embraced” by minority instructors and encouraged to “voice their feelings” and “share experiences about being a kid of color,” according to school presentation slides obtained by The Post.

Meanwhile, white kids are herded into separate classrooms and taught to raise their “awareness of the prevalence of Whiteness and privilege,” challenge “notions of colorblindness (and) assumptions of ‘normal,’ ‘good,’ and ‘American’” and “understand and own European ancestry and see the tie to privilege.”

‘One hundred percent of the curriculum is what whites have done to other races. They offer nothing that would balance the story.’

Under Bank Street’s “Racial Justice and Advocacy” curriculum, parents say, teachers push white kids to grapple with America’s history of racism. Then they indoctrinate them into thinking “systemic racism” still exists, and that they’re part of the problem and must hold themselves accountable even for acts of racism committed by others.

“One hundred percent of the curriculum is what whites have done to other races,” said another Bank Street parent. “They offer nothing that would balance the story.”

Added the parent, who also asked to go unnamed: “Any questions they can’t answer they rationalize under the pretense of ‘institutional racism,’ which is never really defined.”

A slide from the Bank School shows the different goals for white children (right) and “kids of color” (left). 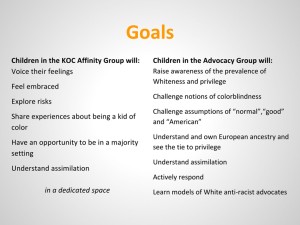 Apparently, segregation in school is okay, so long as it favors children of color. Somehow, it's doubtful that the ACLU is on its way.