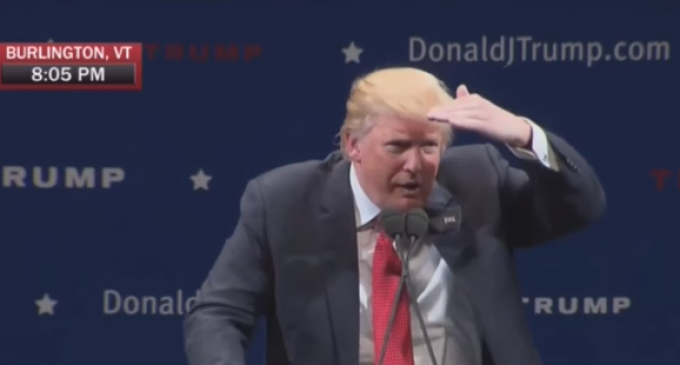 One of the best qualities about Donald Trump is that, much to his opponents' chagrin, he doesn't take any mess.

Although the left and mainstream media have been able to browbeat other GOP candidates like Jeb Bush and John Kasich into accepting whatever bile they spew their way, Trump adamantly refuses to stand for it and defends himself, even at the risk of stoking “controversy” almost entirely-manufactured by his detractors.

One example occurred at a Trump campaign event in Vermont. Video emerged of the Republican leader addressing an excited audience only for the pleasant atmosphere to be disturbed by a heckler. The heckler proceeded to interrupt Trump, trying to provoke a negative response from him.

Knowing that this man had nothing of value to say and was simply trying to cause trouble, Trump asked security to remove him from the scene, provoking applause from the audience. Taking it in stride, the candidate quipped, “Hey, it wouldn't be Vermont if there weren't at least one of those.”