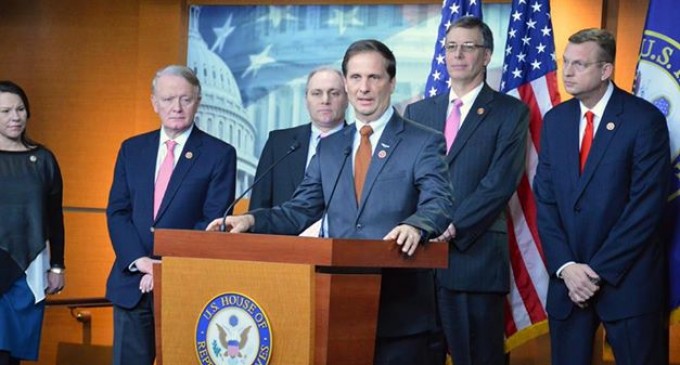 Rep. Chris Stewart of Utah introduced a bill this week to cut funding for paramilitary units in any of the 48 federal agencies that now have these SWAT teams, such the Bureau of Land Management, the IRS, the Department of Agriculture, Department of Energy, etc etc etc

These units are really just Obama's private army – and some Republicans are actually working to halt this communist uprising.

Rep. Stewart set out to create this legislation in response to the Cliven Bundy ranch stand-off with BLM agents.

“There are lots of people who are really concerned when the BLM shows up with its own SWAT team,” he said, the Salt Lake Tribune reported. “They’re regulatory agencies. They’re not paramilitary units, and I think that concerns a lot of us.”

We wish you the best with those efforts Rep. Stewart. Of course, the Obama regime will need his private armies when it finally hits the fan here in the US, so he will be looking to stop any actions that strip him of his minions.

If you would like to encourage the actions of Representative Stewart, why not go over to his Facebook page and post some words of support: https://www.facebook.com/RepChrisStewart

Rep. Chris Stewart of Utah, concerned about the armed agents that surrounded Nevada rancher Cliven Bundy’s property, is mulling a measure to cut funding for any “paramilitary units” that work for the Bureau of Land Management, the Internal Revenue Service and other federal regulatory agencies.

“There are lots of people who are really concerned when the BLM shows up with its own SWAT team,” he said, the Salt Lake Tribune reported. “They’re regulatory agencies. They’re not paramilitary units, and I think that concerns a lot of us.”

His mulled amendment to an appropriations bill comes in context of recent BLM actions against Mr. Bundy: The federal agents armed themselves and surrounded his property, tasered his son, closed down road access to the ranch and even shot a couple of his prize bulls. The reasons? Mr. Bundy hadn’t paid his grazing fees to the federal government, but rather fought the matter in court.

Militia from all over the nation came to the ranch to support Mr. Bundy in his standoff with the BLM — and for that, Senate Majority Leader Harry Reid labeled them “domestic terrorists,” various media reported.

The BLM finally backed off and left — but not before a shocked nation expressed outrage at the government’s armed stance against a man who, at the root, was guilty of not paying a bill.

Mr. Stewart said it’s high time the government end its practice of arming its own special units for various agencies, like the BLM and the IRS.

“They should do what anyone else would do,” he told the Salt Lake Tribune. “Call the local sheriff, who has the capability to intervene in situations like that.”

The Interior Department, for its part, said the BLM and National Park Service had armed agents at Mr. Bundy’s ranch to guarantee the safety of the public and of their workers.