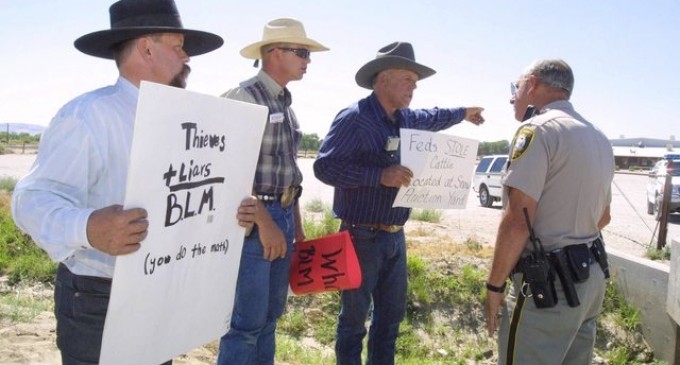 Cliven Bundy has been battling the federal government since 1993 to graze his cattle on public land. Now, with the arrest of his son and confiscation of 234 of his cattle, Bundy, joined by protesters, face down 200 armed federal agents.

Nevada Gov. Brian Sandoval has called federal actions ‘intimidation’ and especially blasts the fact that the feds have set up a “First Amendment Zone”, where federal officials have tried to corral people protesting within a certain area, all other areas are “First Amendment Free.”

“Wake up America,” Bailey Bundy Logue told KSL-TV. “Look what our ancestors fought for and we need to stand up for that. We need to realize what’s happening. They are taking everything away from us. This isn’t only about one family. This is about everyone’s family. This is martial law and it’s in America and so what are you going to do to have it stay out of America?”

Reports now coming in from the Guerilla Media Network: The cattle are dying and being slaughtered and buried in the desert by federal Agents… The protesters tried to stop a convoy of trucks and backhoes coming off of the PRIVATE land owned by the Bundy’s, so they could be inspected by a sheriff … The agents then started tazing the protesters and throwing women to the ground … Video will be up soon ….