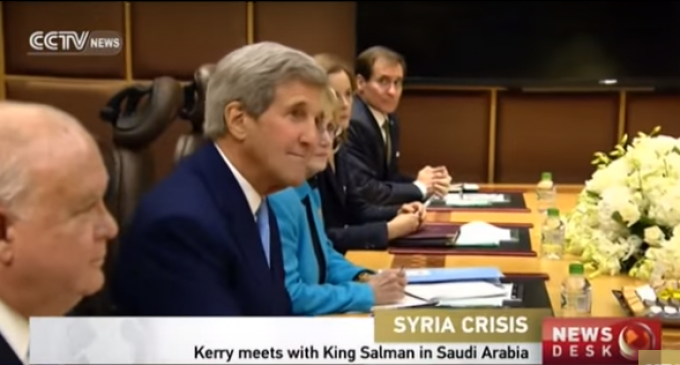 The US is stepping up the proxy war we have with Russia in shoring up anti-Syrian rebel forces (including, mainly ISIS), who Russia is currently out to annihilate.

The US through what Hillary wanted to coin as the “Clinton Doctrine”,  before Benghazi, is the “doctrine' that led the US into this position.

Clinton with Obama's blessing, mobilized the Arab Spring through back channels.  Needing to get foreign policy credentials to strengthen her run for President, the idea was to overthrow the dictators in the Middle East one by one-making it appear to be a grassroots movement, inspired by America and democracy.

When this backfired at Benghazi, all the damage control and lies were concocted to control the narrative on US foreign policy.  When that backfired, as the video defense fell apart hard, damage control could only be tried to save face, and blame everyone but Clinton.

Now the US is in bed with jihadists.  Kerry is meeting with the Saudis and Turkey, who are forming a coalition to utilize these theocratic jihadists to win the day to accomplish what?  It's time to throw these ideals Clinton brought in, there is nothing to be gained by outing Assad, at this point.

Going up against Russia, and Syria and Assad is not something that a few groups of roving bands of jihadists can accomplish-and even if they could-all that would be replacing Assad are those Sharia law jihadists.

What is the US doing?  And why are we spending anymore money on a losing cause?

more on Syria and the US proxy war