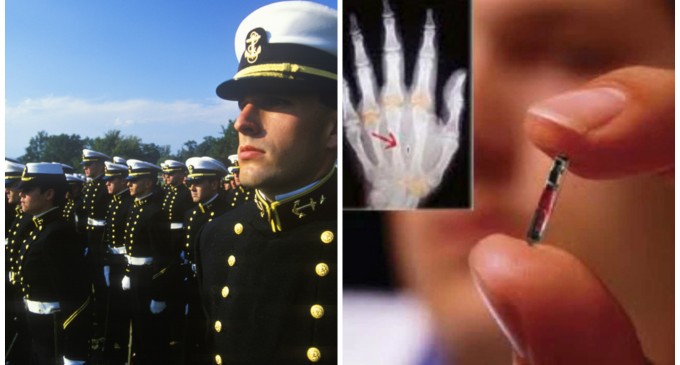 Microchipping is no longer a sci-fi idea but one that the US Navy is considering for the military.  Various forms of microchipping are being discussed, from implanting brain chips to heal soldiers, to edible “authentication microchip” and an electronic tattoo that can read your mind.

Enter US third party presidential candidate, Zoltan Istvan, of the ‘Transhumanist' party.  He met with US Navy officials to discuss merging humans and machines.  Istanv claims that the Navy is “keen to draw up policies about microchip implants”. These will be used to carry and track information inside the human.

They have begun a course of programs intended to help repair cognitive function in the brains of soldiers who have experienced traumatic brain injuries. These programs focus on implanting chips into brain tissue. On page two read how this science fiction is coming to fruition.

DARPA is working on this particular implant, into the soldiers' brains to “make them more resilient to warfare”.

But what if a soldier has self implanted, “unauthorized chip”?  This is what Istvan says that the military is concerned about.   What if as a child, one was implanted with a chip to keep track of one's whereabouts?

America’s children should not be used like a Nazi experiment and have microchips placed under their skin under the guise of “their safety”.  Yet an NBC News report has promoted the idea that microchipping our kids will happen “sooner rather than later”, arguing that just as the barcode was a scary new trend at one point, so too the microchip will become as accept as the barcode.

The piece flips back to pushing the idea when it quotes electronics expert Stuart Lipoff, who asserts that microchipping children is safe and inevitable.

“People should be aware that testing is being done right now. The military is not only testing this out, but already utilizes its properties. It’s not a matter of if it will happen, but when,” states Lipoff.

Read the rest of the story on page two, how microchips may need counter chips to protect state secrets.