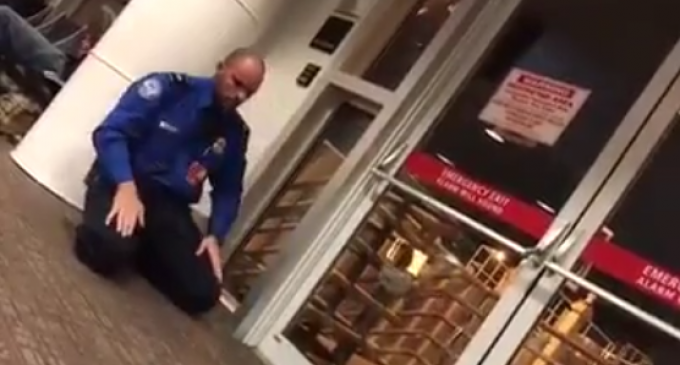 You’d think that more Muslim men would be a bit reluctant to get on all fours considering the recent sermon given by an Imam revealing Allah had gotten on board with forced sodomy to help jihadists get used to large packages of explosives being showed up their nether regions.

And really you can make a lot of bad acronyms out of TSA that burrow into this premise even deeper like Terrorists Sodomizing America and Team Soros’s Assholes. Unlike those eager little sexually adventurous terrorists taking one in the back for their big Daddy in the sky, we don’t want to be graphic here, it’s just these are the facts right now and we have to report the story.

And all jokes aside this is actually a very serious topic – hidden explosives and airports.

As apparently none of this fazes the TSA agent caught on video recently at the Seattle Airport posterizing and praying to Allah in full view of passengers.

And to state the obvious, just because the TSA agent felt comfortable, doesn't mean all the passengers felt the same way. But hey our God doesn't ask our men to turn gay for him so we got to cut this poor Muslim TSA agent some slack. He was probably just asking Allah for a little extra strength to take what was coming or praying for an extra large package depending on his prior orientation to Allah’s new revelation.

Again, I am joking to help lighten up an otherwise terrifying topic that needs to be discussed. TSA Muslim infiltration and reform. Did you know that reports disclosed in 2015 revealed 73 TSA agents are on the national terror watch list? That is what makes this new video showing a TSA agent prostrating and praying to Allah so alarming. Learn more and view this video for yourself on the next page