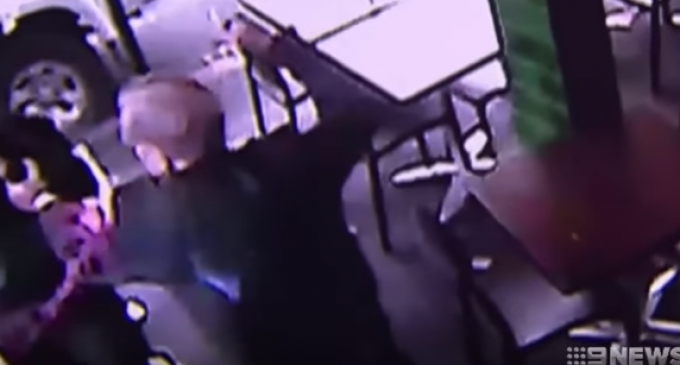 Andrew Bolt is an Australian Conservative columnist who has his fair share of criticism, similar to that of the Ben Shapiros and the Ann Coulters of the world.  As a matter of fact, both of those have been the victim of surprise projectiles launched in their direction by the haters of the truth.  Typically, the perpetrators are Leftist anti-Free Speech anarchists (though, not actual anarchists…they just like the word and the fact that they get extra attention in the nightclubs when they talk about all the “organized events” they have planned).

Australia has its share of Leftist snowflakes and they, like their American cousins, are completely unhinged, foul-mouthed, cowardly rioters, wearing masks and hoods, and running at the first sign of trouble…that is, after beating someone, breaking windows, trashing transformer boxes, setting fires, throwing Molotov cocktails and bricks, or spray painting on everything they see.

About the only positive thing you can say about these idiots is that they may just be too stupid to procreate.  We can only hope.

When it comes to Leftists, though, they do appear to be acting on the orders of one large, moronic puppet master who pulls the global strings of knuckleheads everywhere.  Quite frankly, these folks are just too numb-skulled to be able to pull this stuff off of their own accord.  There is just no way that they can be this well organized without a big sugar daddy paying them to do so.

So, I’m completely convinced that a call goes out from the main moron, whose proxy then puts out a call to the underling idiots, who of course pass on the message to the throngs of jackasses, who finally call all their slow-pated friends to join them in a frolicking day or night of faux protesting and general menacing of the population at large.  (Listen, this is not how I would do it, but then again, you gotta remember that these people are really stoopid, so it just stands to reason that they need a central dispatcher of some noted talent to be able to wrangle all the trained monkeys to dance in concert as the organ music grinds away).

As for Andrew Bolt, the Australian Conservative columnist; he was physically attacked as he entered a local eatery by two individuals (masked and hooded of course) while a third took pictures with a camera.  The thugs were a teensy-bit outmatched, however, as Bolt decided to fight back.  The video and commentary continue on the next page…