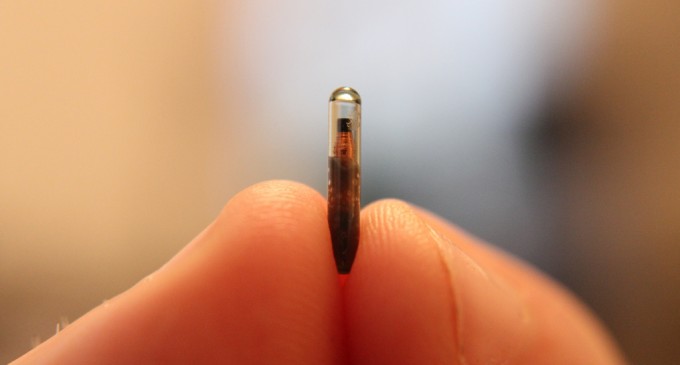 The federal government wants your DNA….and it wants to place it into a national biometric ID system (see H.R. 418, “The Real ID Act of 2005”).

The Supreme Court has already ruled that law enforcement can capture your DNA involuntarily, without a warrant, if you are just suspected of a crime.

Now we have the feds beginning to capture DNA through illegal traffic stops across 30 cities across the US (see our post from earlier today).

Of course, we've already seen Biden state that the Supreme Court will soon rule if it is OK to implant people with RFID chips to track their movements and use brain scan technology to ascertain if they are predisposed to committing a crime (see video below).

The writing is on the wall: the government wants to implant you with a chip that contains your DNA and tracks your every movement.

Simply tracking your emails and phone calls through the NSA will NOT be enough!

Remember, at its core socialism, communism and fascism are all about CONTROL.

It is a philosophy that you as a human being, and society as a whole, can't be trusted and therefore every movement must be regulated and controlled.

The US Supreme Court has already ruled in favor of law enforcement and your DNA can be taken involuntarily, without a warrant, if any police officer suspects you, of an alleged crime. A few days ago, our ever-expanding police state took to Texas, my home state, to acquaint a weary citizenry with coming mandates to surrender our DNA. For those of you hoping to rely on the US Constitution's Fourth Amendment for protection against unreasonable search and seizure of your DNA be forewarned.

The government wants, has legislated and is working toward national Biometric identification. It was legislated in 2005, funded in 2010 and mandated in 2011. Republicans and Democrats voted in support of establishing, funding and implementing a national biometric ID and database.

The text of the bill can be found here.

Implementation of provisions of the “Real ID Act” hidden in HR 1268 is the responsibility of the Department of Homeland Security. Thirteen states are already “Real ID” compliant. All remaining states must be required to be compliant by 2021. Any state failing to comply with this law, will be, at the discretion of the DHS, by law, denied federal subsidies for infrastructure, security, and healthcare.

Although some states currently accept a finger print as an acceptable biometric identifier, eventually anyone desiring to live and work in the United States will be required to surrender their DNA—through a voluntary blood or saliva sample—to be entered into a national database for identification purposes. It has been legislated and funded by both Republicans and Democrats, and entered into the federal registry.

In June of 2013, the Supreme Court ruled in Maryland v. King—by a vote of 5-4—that it is constitutional for police to take DNA swabs, without a warrant, from those, rightly or wrongly, arrested of a crime. The ruling, the majority opinion (written by Justice Kennedy) and dissenting opinion (written by Justice Scalia) joined by—pay attention now—Justices Ginsburg, Sotomayor and Kagan, can be found here.

In Maryland v. King, the state sought to uphold a conviction based on the practice of warrant less gathering of an alleged criminals DNA—at the time of his arrest and detainment—which resulted in a conviction for an unsolved rape unrelated to his original arrest.

Note: Maryland v. King did not question the guilt of the accused, only the constitutionality of the warrant less DNA gathering

In 1969, fingerprinting—as today's DNA gathering—used as a biometric method of identification, was in its infancy, and met Supreme Court challenges for violating unreasonable search and seizure rights. Today, most Americans, and our courts, recognize and accept fingerprinting to be a “widely known and practiced” method of identification in government law enforcement circles.

According to Justice Kennedy's majority opinion (provided above) warrantless gathering of DNA by law enforcement will now become another “widely known and practiced” method of identification in America. Moreover, government law enforcement officials can now gather your DNA involuntarily for investigative purposes benefiting the public good.

Many Americans will fail to grasp the connection between the Real ID Act, the June 2013 Supreme Courts affirmation of warrant less DNA gathering and the Texas roadblocks reported two days ago. Many will deny that they are slowly being indoctrinated to accept this Supreme Court sanctioned law enforcement technique—much like the Patriot Act and the National Defense Authorization Act—as necessary for public safety, national security and protection from terrorism.

Some will simply brush all of this off as another right wing conspiracy theory.

To quote from our most conservative Supreme Court Justice Antonin Scalia's dissenting opinion on this historically significant case:

“Make no mistake about it: As an entirely predictable consequence of today's decision, your DNA can be taken and entered into a national DNA database if you are ever arrested, rightly or wrongly, and for whatever reason.”

The government, once again, is chipping away at us. Incrementally putting America to sleep while they steal our inalienable rights without opposition. Then again, I am just a right wing nut with zero proof or precedent to back it up.