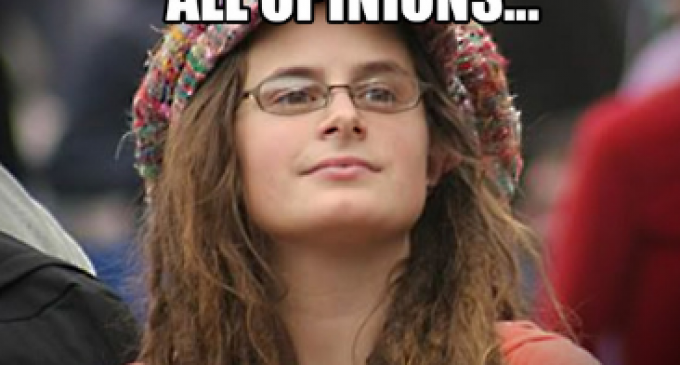 A study out of Social Psychological and Personality Science in 2013 has been referenced in light of the recent Conservative accusations that Liberals are as intolerant as they claim everyone else is.  American-trained psychologist Mark Brandt (who is now at Tilburg University in the Netherlands) approached this subject with the help of two other sociologists, Geoffrey Wetherell and Christine Reyna.

Rather than go into the doldrums of the report, piece by piece, I’m going to do something a bit unorthodox and skip right to the conclusion.

Why?  Well, it just so happens that the conclusion is much more interesting than the whole of the article by Politico Magazine.  First let me show you the end so that I can explain why I’m doing this in a way that’s as backward as Leftist logic.

Here is the final paragraph of the article:

Progressives might see the conservatives trailing history as being on its wrong side, but conservatives might feel the same way about the progressives way ahead of the train. Getting everyone onboard simultaneously could well be impossible, but if we share a common vision, even partially, maybe we can at least stay on the tracks.

First, understand that this conclusion follows an exhaustive and point-by-point breakdown of why (in each different issue) Conservatives hate Liberals and Liberals hate Conservatives.

There is one example in the article that I happen to disagree with, but I’ll go into that in a bit.  Note that the above conclusion to the article basically boils down to:  Liberals view Conservatives as knuckle-dragging cavemen who use dynamite to remove a delicate archaeological relic from the Earth and beat their primitive drums in worship to their Sky God, while Conservatives view Liberals as miserable flower children who dance naked in the sun and use pine cones as deodorant, smoking weed and lazing on the taxpayer dime.  The remedy?  None.  But a hope that perhaps (to save the country from oblivion) someday we can all just get along.

Yes, a million words in an article that was researched for years to determine that we just can’t stand each other and that Liberals are no more tolerant than Conservatives.  I fell gratified.  Don’t you?

Now, I haven’t dug deeply enough to determine if this study was done through government (i.e., taxpayer) grants, but it’s probably a safe bet that if it wasn’t, somebody up there on the lofty heights of academia applied for such a grant.

Let’s get to some of the specific examples and then one point with which I am sort of mystified.