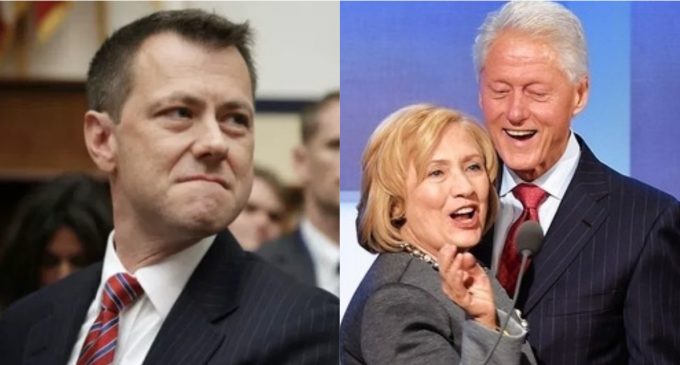 The transcript released by Republican Congressman Doug Collins (GA) on Thursday from former FBI Agent Peter Strzok’s June 2018 testimony reveals that the Department of Justice and Clinton lawyers struck a secret deal to not investigate Clinton Foundation emails – and the FBI consented.

This month Collins also released the transcript from former FBI lawyer Lisa Page’s testimony last summer before Congress that revealed: “the FBI was ordered by the Obama DOJ not to consider charging Hillary Clinton for gross negligence in the handling of classified information.”

This provides more evidence that the Justice Department improperly interfered with the FBI’s supposedly independent conclusions on Clinton’s criminal culpability.

Now we see that there was a secret agreement between the DOJ and Hillary Clinton’s legal team that blocked the FBI from accessing emails on Clinton’s private server as related to the Clinton Foundation. This prompted the FBI to place a “Filter Team” that worked to limit searches on Hillary’s servers.

See details on the next page.