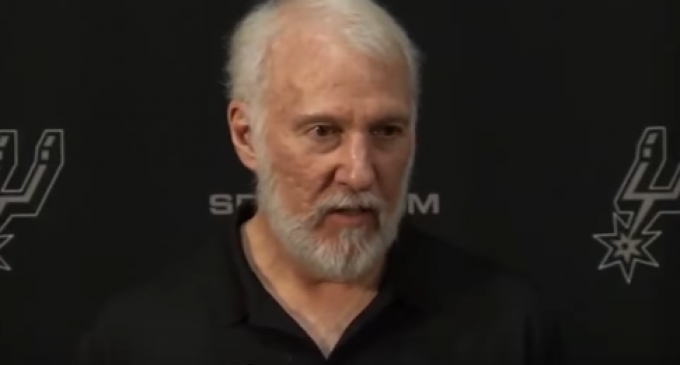 San Antonio Spurs head coach Gregg Popovich thinks he knows better than President Trump when it comes to how Americans feel about millionaire athletes kneeling for the national anthem, and that his supporters need to be forced to feel “uncomfortable” if they are a certain skin color.

But, first, he had to share his thoughts on NASCAR.

“I just heard a comment this morning from a NASCAR owner and from Mr. Petty that just blew me away,” Popovich said. “Blew me away. Where the owner described the fact that he would get the Greyhound bus tickets for anybody to leave and they’d be fired. I had no idea that I lived in a country where people would actually say that sort of thing.”

Mr. Popovich goes on to say how people opposed to kneeling for the national anthem were inspired by the “NAZI” rally in Charlottesville – despite over 99% of the country being shown to clearly disdain NAZI ideology.

One wonders how Popovich manages to lead a sports team without being able to comprehend statistical analysis and probability. Or is he just using his position as a sports coach to spew left-wing socialist propaganda?

Because much like former President Barack Obama, Popovich thinks “Our country is an embarrassment to the world”. Continue to the next page to hear Popovich explain why he is “embarrassed” to be an American.