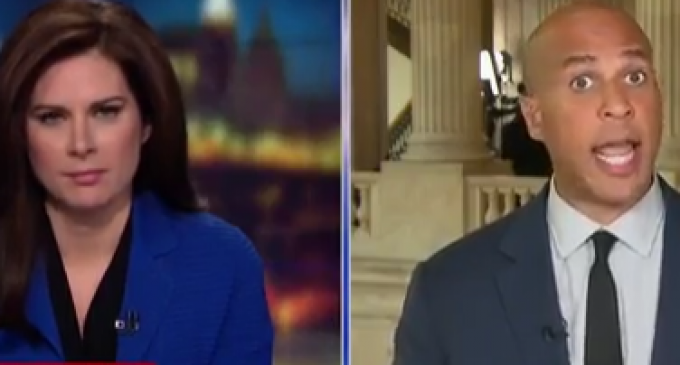 In its bid to stay relevant, CNN is up to its tried-and-true antics of leading its viewers by the nose with the all-too-eager-to please Democrat senators and representatives out of Washington, D.C.  Today's very pliable guest was Senator Cory Booker (D-NJ) who held up a Russian flag and pointed to it, stating, “These guys hacked our elections!”

Okay, so he didn't really do that, but one wouldn't be surprised.

Instead, the Drama King of Jersey slid right into his role as Booker, Private Dick, accusing the Trump administration of wrong-doing (all without evidence of course) and lumped in his perennial arch-enemy, Attorney General Jeff Sessions.  Booker is hoppin' mad about the fact that Sessions got the nod as Attorney General and even more mad that Hillary didn't win, because Lord knows, he could've been the one!

Not many people know this, but Cory Booker was a lawyer…or at least graduated with a law degree.  Granted, he never practiced law and, in much the same mold as Senator Chuck Schumer (D-NY), Booker ran for office directly out of law school in order to, a) strip the taxpayer of his hard-earned paycheck by voting to keep tax rates up, and b) never work in a real job that isn't supported by the taxpayer.  So, Booker has relegated himself to a life of cushy government work while the town where he began his political career languishes under ridiculously high taxes and even higher crime.  You know it's bad when the highlight of your career in Newark, New Jersey is the first murder-free month in 44 years!

As for Sessions, you may recall that during his confirmation hearings, Cory Booker was the first senator in U.S. history to testify against another sitting senator.  With intimations of KKK involvement, Booker said that he couldn't in clear conscience vote for Sessions' confirmation.  Ironically, Booker himself was accused of taking campaign donations from the KKK himself.  While campaigning against a very tough opponent in his first real political battle back in New Jersey in the mid-nineties, Booker's opponent threw that accusation in his direction.  Incidentally, he lost that election.

Booker's antics are well-known and he appears to have a real knack for being the “first” at everything.  First senator to testify against another sitting senator, first City Council member (Newark) to go on a hunger strike to bring attention to open-air drug dealing, the first Black U.S. Senator to be elected from New Jersey, first Black Senator elected since the election of Barrack Obama in 2004.  It could be said that he's somewhat of a camera-hog.  But I didn't say that.  That was the Leftist rag, Salon magazine, referring to Booker as an “avatar of the wealthy elite, a camera hog and a political cipher.”

Booker appeared on CNN and launched right into his tirade about the Russians having elected Donald Trump.