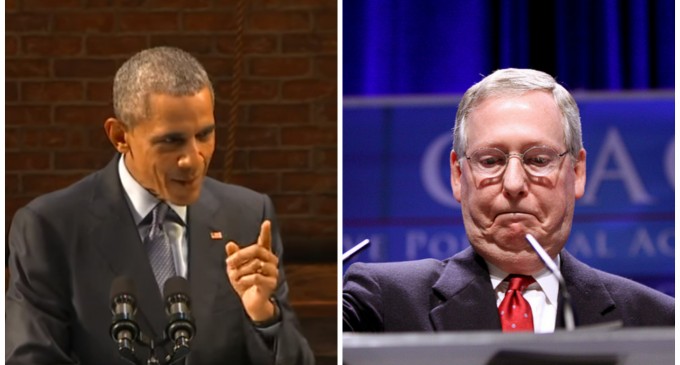 Mitch McConnell is an old boy leader from the south who is a horse trader if ever there was one. If he shakes your hand, check to see if you still have all your fingers. He is more than happy to play both sides of the fence, and it is clearly why voters are angry at the Republican establishment, which he represents to a “T”.

He is famous for saying one thing, than working out an opposite deal in a back room somewhere that completely goes opposite to his assurances previously. Most recent was his treasonous offer to fast track an Authorization of Military Force (AUMF) for Obama that would give him virtually unlimited power to launch military actions any time in any place, even on U.S. soil, without having to go through the inconvenience of conferring with the Congress. McConnell is simply a traitorous, dishonest political operator, and he is impossible to trust.

The reason all this is brought up is that there is brewing a decision in Washington D.C. that could have a much bigger long-term impact than the 2016 presidential election, and it has to do with who is telling the truth about the recently deceased Supreme Court Justice Antonin Scalia. And the decision could turn the Constitution into a moldering relic.

See decision that could destroy the U.S., page 2: