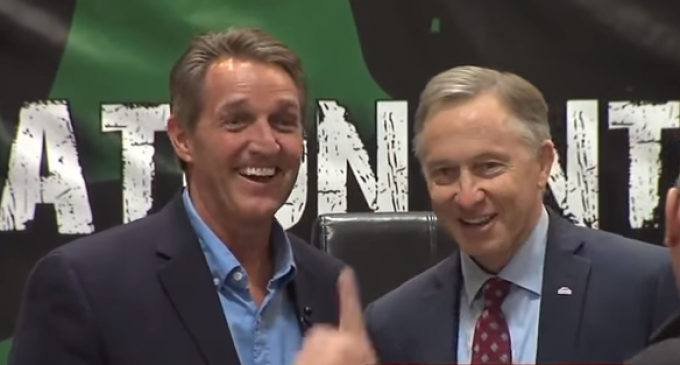 Jeff Flake is…well, he’s a flake.  Make no mistake, he is a dyed-in-the-wool McCainite who is intent on keeping things in the Swamp just as dirty, oily and mucked-up as they are already.  He detests Donald Trump and even more so, those who voted for him.  Think about that for a moment:  the Flake is disgusted by more than 60 million people in America…and they’re just the ones who actually voted for Trump!  Imagine all the other Trump supporters who didn’t vote!

Arizona is one of those places in the country that doesn’t like to play by the rules of the rest of the Establishment.  Even though its administrators, for the most part, are RINOs and talk about how it’s good to be a Moderate, the people who live in Arizona, not so much.  In fact, there is a reason why Sheriff Joe Arpaio was in office for so long.

Therefore, when the Flake and BFF, Mesa Mayor John Giles (another RINO) talk about the dangers of a Trump presidency and deride him and his supporters as “idiots,” you can bet that the rest of Arizona is thinking just the opposite.  If they weren’t, do you really think that the Flake would be bowing out of his senate race?

In a speech in Arizona just the other day, the Flake and Giles were having a tender moment alone when a hot mic caught them discussing Trump and the GOP!  Read on the next page about what they shared in secret…or so they thought!